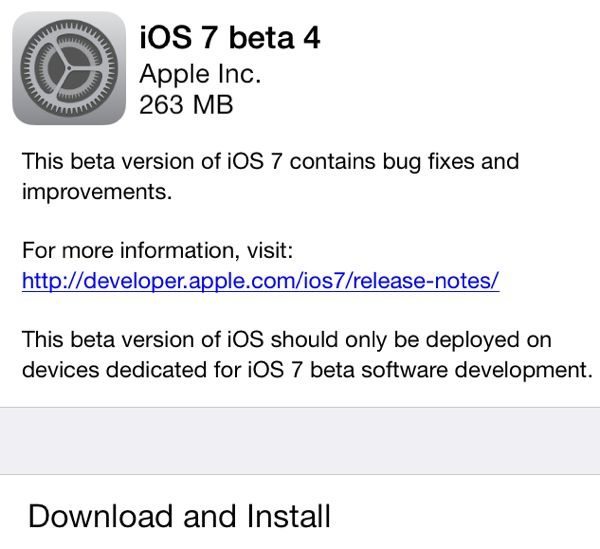 Apple has finally released the new iOS 7 beta 4, which is 3 weeks after beta 3. You can download and install the OTA update right now, which does not does not take long at all.

If you are a registered developer we would love to know what you make of the new iOS 7 beta 4 OTA update build 11A4435d, we will of course be listing any changes and new features a little later when we have looked deeper.

The update just says this the beta 4 version of iOS 7 and contains bugs fixes and improvements. The update can be installed on your iPhone or iPad, we believe new enhancements to Siri and as well as stability and interface improvements will show up in this new update.

Download OTA now by visiting Settings >General > Software update. We will reveal more a little later when we know more about the changes and improvements.

UPDATE: The full changelog of features will be released in a few hours, one thing we have noticed is a new design layout when you get a phone call coming in.

UPDATE 2: New features in iOS 7 beta 4 include – Animations are a little faster and smoother, Lock screen UI tweaked, the arrow has been added to the lockscreen, the decline and answer call buttons have been changed in the phone app, the Spotlight UI has changed a little and there is a new completed uploads option in Notification Center.