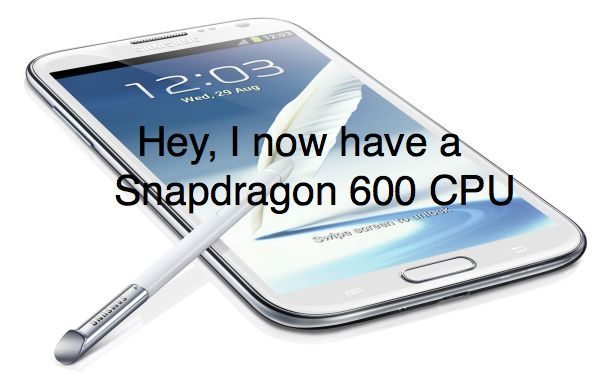 The new Samsung Galaxy Note 2, ok old SGN2 now has the official Snapdragon 600 processor on board. We have known a while now that this smartphone will get an upgrade and now it has, but sadly it will not be for everyone.

We cannot wait for the Samsung Galaxy Note 3 to be announced, but for now we will have to make do with Samsung releasing yet another phone that has had a simple upgrade. Samsung are destined to release as many handsets as possible no matter if it is a different variant of the same phone, talk about over saturating the mobile market.

The official Samsung Galaxy Note 2 with its new Snapdragon 600 CPU on board looks like it will be inclusive to Chinese carrier China Mobile only; the reason for its release is so that it can support China Mobile’s W-CDMA, TD-SCDMA, TDD-LTE and FDD-LTE-enabled network.

The China Mobile Snapdragon 600 Galaxy Note 2 still comes with all the other features like the standard version, such as a 5.5-inch HD display with a resolution of 1280 x 720 pixels, 2GB of RAM, 16GB of built in storage, Android 4.1.2 Jelly Bean, 8-megapixel rear camera and a 1.9 on the front, as well as the microSD card slot.

We cannot see this version with the 600 CPU releasing in either US or Europe, wonder how many more smartphone variants Samsung can come up with before they release the Samsung Galaxy Note 3?