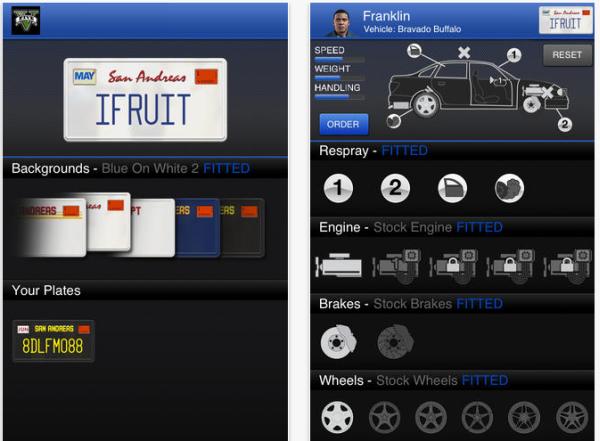 Although some lucky gamers got hold of the title early thanks to certain retailers, Grand Theft Auto 5 is released today with the most eagerly anticipated game release in 2013. As gamers get hold of their treasured copy of the title a GTA 5 iOS companion app is released but an Android release is MIA.

We reported yesterday about the possibility of a GTA 5 game becoming available for mobile users, and now RockStar games has released iFruit to the Apple App Store for free. The application allows players to interact with GTA 5 while away from their games console by changing certain aspects in the title, and receive information on the latest in-game news.

iOS users will be able to create their own vehicles with custom wheels, window tints, and even reserve their license plates for the Grand Theft Auto Online multiplayer world before they are gone. Users can even take care of Chop the dog who is Franklin’s pet in the game teaching him tricks to keep the Rottweiler happy.

You can even take him on walks to keep him fit as the developer looks to keep gamers immersed in the game even while they are on the go. The developer has stated that the app will eventually become available to the Android and Windows Phone platforms, but no release time scale has been given so far.

Grand Theft Auto: iFruit is available free on the App Store for owners of the iPhone, iPad, and iPod Touch running iOS 4.3 or later.

Have you already purchased GTA 5?