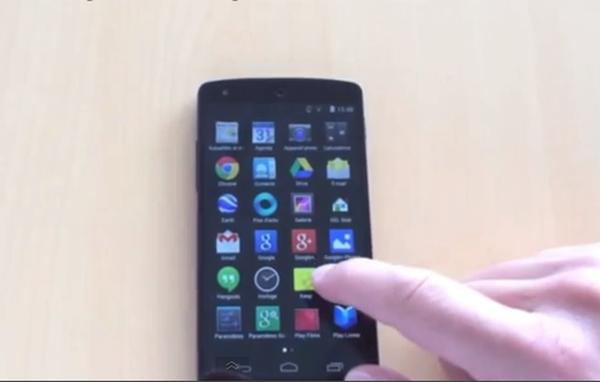 The upcoming release of the Nexus 5 hasn’t exactly gone without numerous leaks and sightings with the smartphone expected to arrive later this month, and now a Nexus 5 and Android 4.4 KitKat video shows the design and operation of the handset.

Only yesterday we heard that the Nexus 5 had managed to pass through Bluetooth SIG, and now the video that you can see below this article is showing the handset in all its glory. The video is juts over seven minutes long and has been put up on YouTube by Smartphones.sfr.fr.

It begins by showing us the slightly curved design of the handset with the handset looking to have a rubberized back cover similar to the Nexus 7. We get to see the bottom of the device with its two speakers that have the microUSB port in between.

The video continues to give us a look of the outside of the handset before moving onto the software that is running on the device, and in the About phone section we can see that the software is listed as Key Lime Pie but this will just be an older build of Android 4.4 KitKat.

While this handset is probably an older prototype of the upcoming device it is the clearest images we have had so far of the device. It is expected that Google will be showcasing the device along with the new Nexus 10 and the latest version of the operating system at anytime now.

Are you planning on getting the Nexus 5?