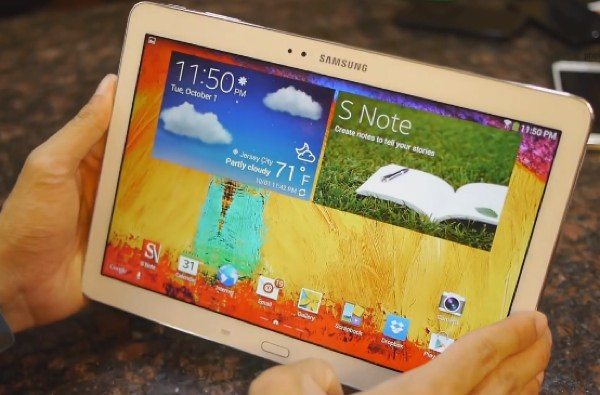 The Samsung Galaxy Note 10.1 (2014 Edition) is the second-generation Note 10.1 tablet. Its release is rolling out now in different regions across the world (despite the 2014 moniker), and it’s likely to be on plenty of wish lists this holiday season. We’ve put together a Samsung Galaxy Note 10.1 2014 review video collection that may help readers decide if this should be their next tablet.

Dimensions are 243.1mm x 171.4mm x 7.9mm and the weight is between 535g and 547g depending on model. Three different versions will become available, WiFi-only, WiFi and 3G, and Wi-Fi and LTE. Users also have the benefit of the S Pen stylus and the Galaxy Note 10.1 2014 comes in white or black color options.

The first YouTube video review that we have embedded below is a 14-minute look at the device. It begins by looking at some of the improvements over the original Galaxy Note 10.1 and then shows an all-round look at the design and a tour of the hardware. It goes on to look at the display, user interface, S Pen use, camera and much more.

The video wraps up with recapping many of the benefits of the tablet, describing it as a “specs beast.” Pros are seen as the high-resolution display and S Pen usage, while cons are viewed as the price (starting at $549.99) and lack of NFC and Air Gesture feature. Ultimately a rating of 8.5/10 is given for the tablet, which is obviously very high.

The second video that you can see below is a comprehensive 28-minute review of the Galaxy Note 10.1 2014. Again, this one starts with a look at the design and then there’s a lot of praise for the improved display of the tablet. It also shows some of the bundled apps and stylus use, and then some benchmark results are given. There’s also a brief look at gaming on the new Galaxy Note 10.1.

The third video review is a briefer 6-minute wrap-up on the Galaxy Note 10.1 2014. This review gives some nice close-up looks of the device, runs through many of the major specs, and also notes some slight lag in some areas of performance. This may be a shorter video but it does give another interesting take on the tablet.

The fourth and final video review we have for you focuses totally on the software experience of the Samsung Galaxy Note 10.1 2014. This offers an invaluable look at how to make the best of the software with this device so it’s 15-minutes well spent. You may also be interested in the official Samsung introductory video to the new Galaxy Note 10.1 that you can see here.

Hopefully after checking out these Samsung Galaxy Note 10.1 2014 video reviews, you’ll have a clear idea of whether this is the right tablet choice for you. Have you decided to purchase the new Galaxy Note 10.1 tablet? Let us know with your comments.