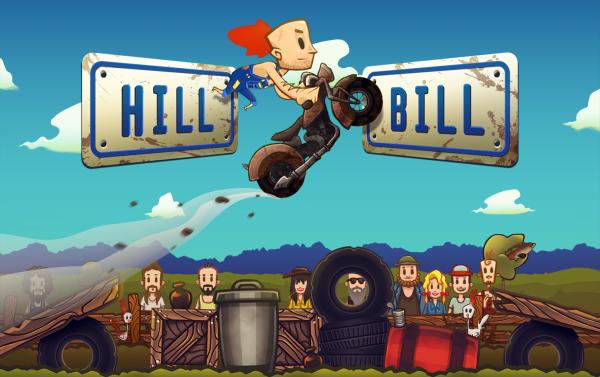 There are lots of fun and addictive games available on the smartphone platforms covering a number of different genres, and today we have news of the Hill Bill Android and iOS motorcycle stunt game that lets you ride like Evel Knievel and is now free for this weekend only.

California based developer Balloon 27 has made their fun and additive Hill Bill game free on the Google Play and App Store until Monday, October 28th. The game centres on the crazy character called Bill who wants to ride like his hero, Evel Knievel, and jump over the Grand Canyon.

Bill progresses attempting bigger and more dangerous and crazy stunts on his old garage sale motorcycle as each level progresses. The developer is celebrating the release of the Vegas level pack with the free offering having 20 levels out of the 60, or if they want the full game straight away it is priced at Â£0.69/$0.99.

The game features great art work and audio effects and as you progress you earn in game credits so you can upgrade or purchase new motorcycles and costumes without spending any real money. Extra worlds, levels, bikes, and much more are promised soon in future updates.

Hill Bill is available worldwide on the App Store for owners of the iPhone, iPad, and iPod Touch running iOS 4.3 or later and Google Play, and check out the demo video below.