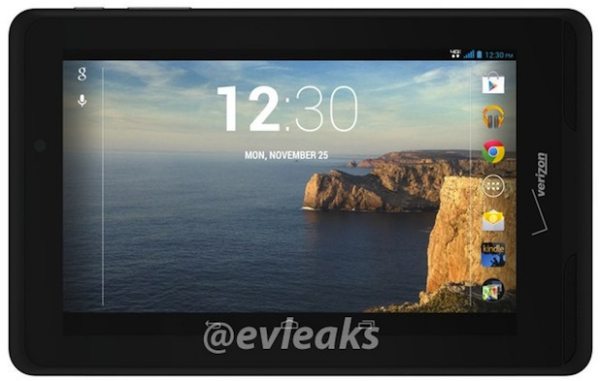 Verizon said that the Nexus 7 LTE version would be coming soon, but as of yet no news on that. Could be down to the new leaked Ellipsis 7 tablet.

@evleaks have just posted a photo on Twitter showing of what they have titled the ‘Verizon Ellipsis 7, 2013’, this could be the reason why Verizon has not released the LTE Version of the Nexus 7 because they have decided to release its own model.

Many will be asking the question if this is all true, “What have Verizon built its own tablet, they should have just released the Nexus 7 LTE?”

If you look at the render photo below of the Ellipsis 7 it has November 25 on it, this could be a suggestion of when it will release. No price, no release date and no official announcement, oh and no Verizon Nexus 7 LTE so the Ellipsis 7 might just be real.

Look at the size of the bezel; they probably made this bigger to fit the Verizon logo on it.
When we look at the definition of Ellipsis it says ‘the omission from speech or writing of a word or words that are superfluous or able to be understood from contextual clues”

If that is the case then Verizon, please do not go down the Ellipsis 7 and make it understood that you should just release the Nexus 7 LTE.