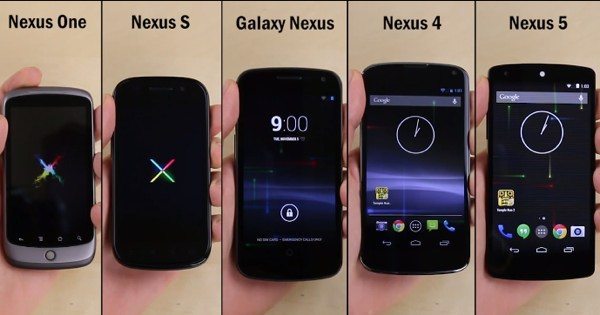 The Google Nexus 5 recently released to a blaze of publicity and huge demand. Android Nexus device fans may be interested in a video that we are showing you today, which shows the Nexus 5 in speed tests against all of the other Nexus smartphones that have ever been released.

The popularity of the Nexus 5 is not surprising when considering its specs and affordable price tag. While the results won’t be particularly surprising, it’s pretty amazing to see just how far Nexus smartphones have come.

The 3-minute YouTube video that we’ve embedded for readers below this story shows speed comparison testing of the LG Nexus 5, LG Nexus 4, Samsung Galaxy Nexus, Samsung Nexus S and the original HTC Nexus One handset that was released back in 2010.

The Nexus 5 with its 2.3GHz quad-core processor and 2GB of RAM outsmarts all of the others, but that’s only to be expected given that it’s just released. Also unsurprisingly the Nexus One lagged behind the others, although seeing it lined up with the other Nexus handsets offers a nice touch of nostalgia.

Although the Nexus One only released a few years ago, readers may be surprised to be reminded that this only featured a 1GHz single-core processor and 512MB of RAM, although that was very respectable at the time it released.

The video begins with a boot up test, and while that’s taking place we see the processor and RAM for each Nexus device displayed. The next test involves loading up the same app game on each, and the final test is a browser test involving loading up a tech website.

This really does illustrate just how far the Nexus smartphones have progressed to the latest Nexus 5 that has just arrived on the scene. Why not check out the video below for a look back at the Nexus handsets and how they compare speed-wise.

Are you amazed at the progression of specs and speed between the original Nexus One and the new Nexus 5 smartphone? Send us your comments to give us your thoughts on the Nexus smartphone evolution.

One thought on “Nexus 5 speed tests vs other Nexus smartphones, video”