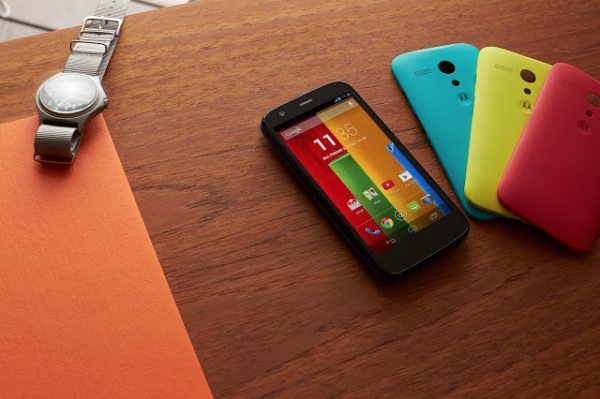 The new Motorola Moto G smartphone is now official, the company announced its new phone at its special event today and the Moto G has been placed in the mid-range smartphone sector.

The official Moto G specs include a 4.5-inch 720p edge-to-edge Gorilla Glass 3 display, it is being powered by the quad-core 1.2GHz Cortex-A7 Snapdragon 400 processor, water-resistant nano-coating, 1GB of RAM, Adreno 305 GPU and will NOT run Android 4.4 KitKat, it will instead have 4.3 Jelly Bean. The handset will get KitKat OS update in January 2014, so at least we know it is coming.

It will come with an unlockable bootloader and no SIM lock, which means no contracts, you simply pay the once and you get the handset.

Other features include 5MP camera on the rear capable of 720p video recording with LED flash, on the front is a 1.3MP camera. It also comes with a 1950mAh Li-Ion battery; even though the batter is not massive it will apparently give you kife for a whole day, and comes with FM Radio.

The back cover of the Moto G is removable and will come with a variety of back covers such as yellow, black, pink, dark, light blue, red and of course white. Motorola will be offering Moto G accessories as well such as JBL wireless speakers, colored protective cases and flip covers.

In the UK the price will be around Â£135 for 8GB and Â£159 for 16GB and will be available with O2, Orange, T-Mobile the networks according to one of our sources. Please do watch the official Moto G video below, have fun. Looks like the US have to play the waiting game for a few months.

It lacks a microSD card slot and for some this is a problem – Will you purchase the Moto G?