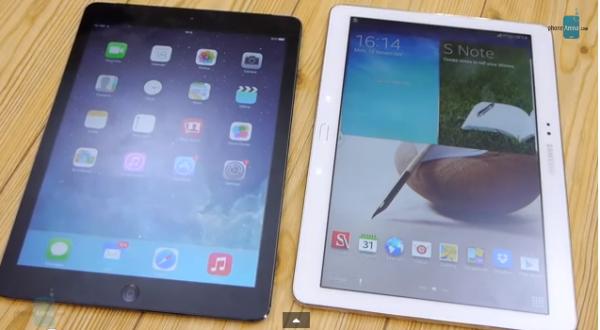 If you are after a new tablet PC in the run up to Christmas there is certainly a lot of choice to be had especially if you are not concerned which platform the device runs on, and today we have the iPad Air vs. Galaxy Note 10.1 2014 Edition video review for your viewing pleasure.

The physical buttons on the iPad Air were found to respond better than those on the Galaxy Note 10.1, before we get to see the specifications of the displays with the Samsung obviously larger and with a better resolution and pixel density and having slightly better movement.

It has to be remembered that the aspect ratio on the iPad Air is 4:3 which may be better for web browsing, while the 16:9 on the Samsung is better suited for video playback. Visibility was found to be pretty similar although colours were found to be more realistic on the Apple tablet.

The Samsung has the added feature of the S-Pen stylus which works well with the device but the user interface was found to be more simplistic on the iPad Air. We are then run through a number of other features on the two tablets but we won’t spoil the rest of the video for you.

Have you been considering either one of these tablets?