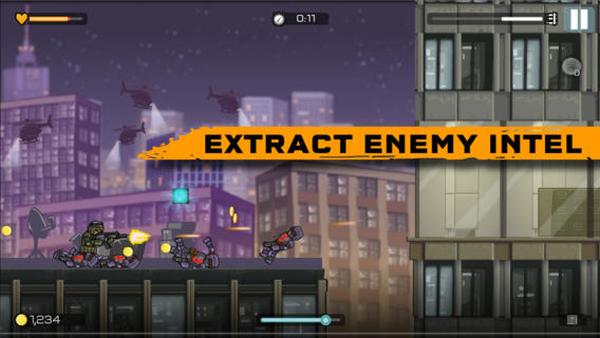 There are loads of quality games available for the various smartphone platforms that are often first successful elsewhere, and today we have news of the recently released Strike Force Heroes: Extraction game.

This title comes courtesy of Sky9 Games and is a spin off from the hit Flash game series Strike Force Heroes that has been played over 100 million times online. The iOS game sees players try and infiltrate the HQ of a rogue military group that are threatening the world.

The game sees you jump and shoot your way through 30 levels that are packed with action, but the enemy soon realizes what you are up to so it is then your mission to escape shooting anything that gets in your way.

You can quickly swipe down on the display to hide behind objects while taking out the enemy one by one, and there are 20 different playable characters that all have unique flaws as well as un-lockable perks.

This allows for different challenges from the game depending on which character you choose, and there are 33 weapons with 2 un-lockable endless modes. Check out the demo video below.

Strike Force Heroes: Extraction 1.0 is available worldwide on the App Store for Â£1.49/$1.99 for the iPhone and iPod Touch, and there is an HD version available for the iPad and iPad mini priced Â£1.99/$2.99.