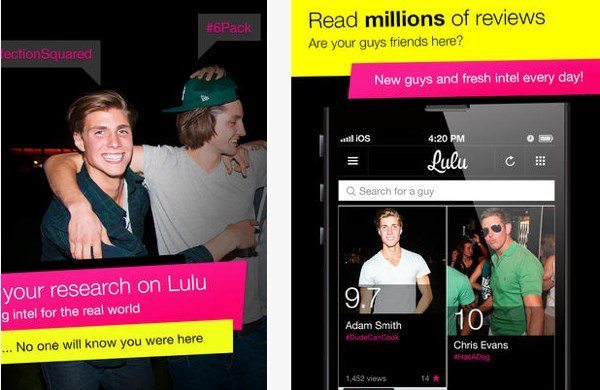 We always enjoy bringing readers details of mobile apps and now and again we find that an app is generating a huge amount of attention, sometimes in a good way but sometimes in a rather negative way. One app that’s of interest at the moment is the Lulu app for girls, which is certainly causing Twitter reactions.

The Lulu Android and iOS apps offer a social networking experience aimed at girls and bills itself as the “first-ever network to unleash the value of girl talk and empower girls to make better decision — starting on relationships.”

Features of the app include relationship quizzes and dating advice from “Dear Dude,” as well as a Favorites section. There’s also a Discover/Browse feature for checking out guys and their various qualities.

The Lulu iOS app can be found at iTunes here and is compatible with iPhone, iPod touch and iPad running iOS 6.0 or later. It’s a free app but you must be at least 17 years old to download the app. The Lulu Android app also has a high maturity rating and is also free. It’s compatible with devices running Android 2.2 or later and can be found at Google Play here.

So far it all sounds pretty harmless so what exactly is creating a stir? The Huffington Post calls Lulu the “worst app for women, by women.” The report explains that users can review male friends under categories such as appearance, sex, humor, commitment etc., and make observations about these. Lulu then comes up with a rating without any discrimination about circumstances, when, how or why.

Reading the report further, Lulu all begins to sound rather seedy as the network is described as an “unacceptable invasion of privacy.” The writer also describes Lulu as “one of the most jaw-dropping, stomach-curling, rosacea-inducing, sad Internet moments of my adult life.”

It seems that plenty of people agree on this verdict of Lulu as CTVNews discusses the Twitter reaction to the app that seems to have outraged plenty of people. One Twitter user describes Lulu as “the new burn book,” while another calls it “the most violating app in the world.”

Another user says that Lulu is a “psychological backfire for women” while yet another Twitter user describes it as “self-destructive and an invitation to misery.” Of course other users love Lulu and liken it to a virtual beauty salon.

We’d be really interested to hear what you think of Lulu? To be honest a small part of me is really tempted to take a look, but if Lulu really is that “stomach-curling,” then I don’t want to contribute to it no matter how intriguing it sounds. It’s also fair to say that if this app was aimed at men about women we’re pretty sure there’d be an even bigger outcry.

Do you use Lulu, and if so do you enjoy this social networking offering or find it all rather sad? Maybe you haven’t tried it yet but from what you’ve seen and heard about the Lulu app so far you’ve already formed an opinion and could share your thoughts with us? Perhaps you’re heading to the App Store or Google Play right now? Let us know with your comments.