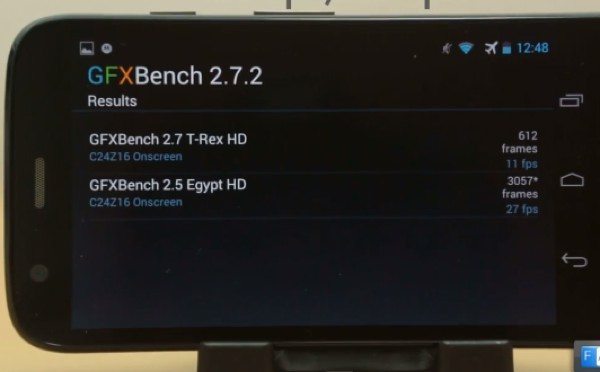 The Motorola Moto G is a recent addition to the market and is an affordably priced smartphone with decent specs and features. Because of its reasonable price tag it’s likely to appeal to plenty of buyers this holiday season. If you’re considering this device you might like to see how the Motorola Moto G competes in benchmark tests against many of the other top phones on the market.

We’ve previously shown readers the results of AnTuTu benchmark testing on the Moto G, but this new information covers a variety of different benchmarks as well as a video showing the tests and scores achieved. For more Moto G information including pricing and specs see our previous articles here.

The Moto G is powered by a 1.2GHz Snapdragon 400 ARM Cortex-A7 quad-core processor with Adreno 305 graphics and the 3-minute YouTube video that we have embedded below shows different tests that include GFXBenchmark, NenaMark, Basemark X, AnTuTu, Vellamo, Quadrant Benchmark, and Linpack. 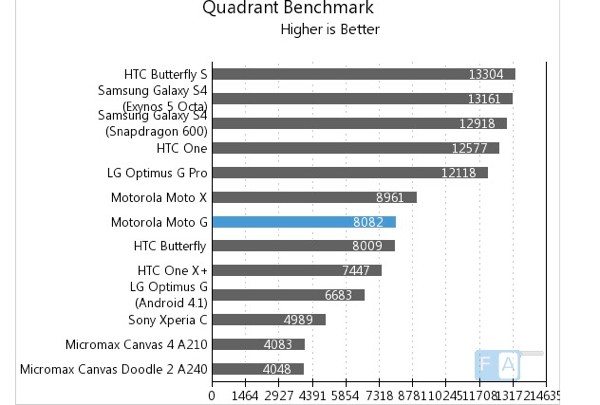 You’ll see the scores of each test on the Moto G along the way, and at the end a full line up of the results. These results have then been compared with many other smartphones including the Samsung Galaxy S4 (both processor variants), HTC One, Motorola Moto X, LG G2, Sony Xperia Z1, Micromax Canvas 4 and more.

Above we’ve shown the Quadrant Benchmark test results and you can see all of the charts in full at Fone Arena. As the Moto G doesn’t have the top-notch specs of some, which makes it a well-priced choice for many, we wouldn’t expect it to be at the top in these comparisons. Nevertheless it holds its own and appears around the middle of the tables or just below in most of the tests.

It would be interesting to know what readers think about the performance of the Motorola Moto G in these benchmarks. Let us know by sending your comments.

One thought on “Motorola Moto G competes in benchmark tests”