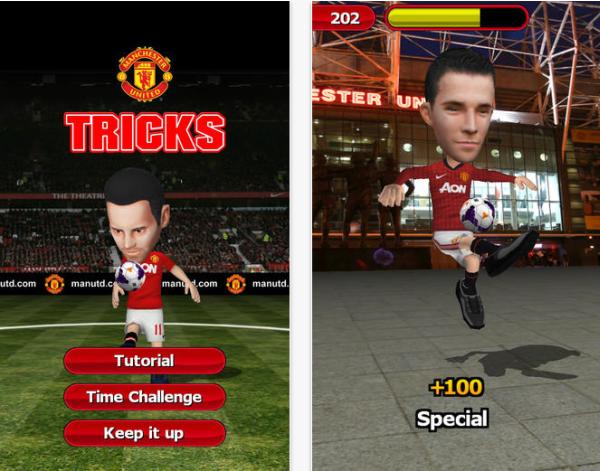 While British football team Manchester United may not be experiencing the best of results lately in the news, but the club is arguably the best supported team in the world with supporters doted around all corners of the globe, and now we have news of the Man Utd Tricks iPhone app that gets some India release favouritism.

Fans of the club can take control of some of their favourite players to show off their skills in the game attempting various tricks. You try and get the highest score on the leaderboard in the Keep it Up challenge, and there is also the Time Challenge.

Users can play the game in the latest Manchester United home or away kit showing off your skills in front of a packed Old Trafford, and you get to choose from three players that include the 40 year old Ryan Giggs, Rio Ferdinand, and Nemanja Vidic.

More players are available via in app purchases that include the likes of Robin Van Persie, Shinji Kagawa, and little pea himself Chicharito with more promised soon. You can even unlock United legends such as Bryan Robson and Andy Cole the goal once your scores are high enough.

There is even the option of customizing the kit ranging from the Busby Babes days through to the latest strip, and Man Utd Tricks is available from the App Store for owners of the iPhone, iPad, and iPod Touch running iOS 5.0 or later.