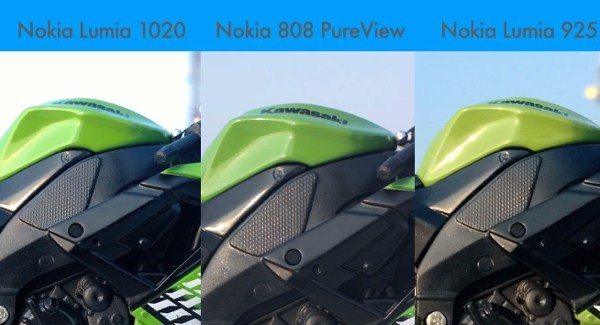 Camera capability is an increasingly important factor for many people when buying a new smartphone. It can therefore be interesting to see how smartphones compare in this respect and so today we’re looking at Nokia Lumia 1020 vs. Lumia 925 vs. 808 PureView camera results, as shown on video.

Before we get to the video we’ll give you the basic camera set-ups of each of these three phones so that you can see how they compare. The Nokia Lumia 1020 released this year and packs a 41-megapixel rear camera with Carl Zeiss optics and PureView technology, auto/manual focus, Xenon and LED flash and optical image stabilization. It also features 1080p video capture with 4x lossless digital zoom and has a 1.2-megapixel front facing shooter.

The Nokia Lumia 925 also released this year and has an 8-megapixel rear camera with Carl Zeiss optics and PureView technology, autofocus, dual-LED flash, and optical image stabilization. The 925 has 1080p video capture and video stabilization as well as a 1.3-megapixel front-facing camera.

The short YouTube video that you can see below this story gives a look at the camera results from all three of the above smartphones and shows how they perform. It shows side-by-side sample images so that you can easily compare the photos taken with each.

We think it’s fairly evident which camera gets the best results and we weren’t exactly surprised, but we’d like to hear what you think. Do you think the Nokia Lumia 1020, the 808 PureView or the Lumia 925 gives the best images. Send your comments to let us know.