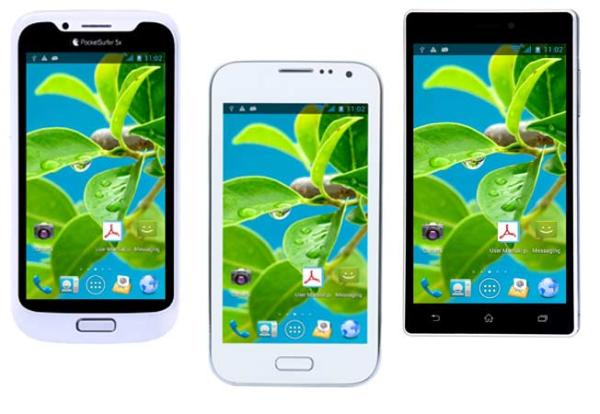 A day doesn’t seem to go by without new mobile phones being released for consumers in India that come at various different pricing levels, and today DataWind have launched a trio of budget smartphones for the country.

The company has launched their first range of smartphones in India that has been called PocketSurfer, which provides three new handsets for consumers in the country. The PocketSurfer 5x is a handset that features a 5-inch TFT resistive display at a resolution of 400 x 240 and is powered by a 1GHz Cortex A8 processor.

Other specs include a front VGA camera, expandable memory, Bluetooth, FM radio, dual SIM, and a battery that provides up to 3 hours of talk time or a day of standby, and runs the Linux operating system and is priced at Rs. 3,499.

The PocketSurfer 5C+ is also dual SIM but runs the Android 4.0 Ice Cream Sandwich operating system and also has a 5-inch display but capacitive and at a resolution of 800 x 480. This has a 1GHz Cortex A9 processor under the hood and also features a 2-meagpiaxel rear camera, VGA front facer, expandable memory, Bluetooth, Wi-Fi, and FM radio.

The battery on this handset is claimed to last up to 3 hours of talk time and 2 days of standby and costs Rs. 4,999. Last up is the PocketSurfer 3G5 that has the same display as the 5C+ but has a dual core Cortex A7 processor clocked at 1.2GHz, and is running the Android 4.2 Jelly Bean operating system.

This has a 5-megapixel rear camera paired with a VGA front facer and other specs include expandable memory, 4 hours of talk time, 2 days of standby, 3G, Wi-Fi, Bluetooth, and FM radio with this being priced at Rs. 6,499.

One thought on “DataWind launch trio of budget smartphones for India”