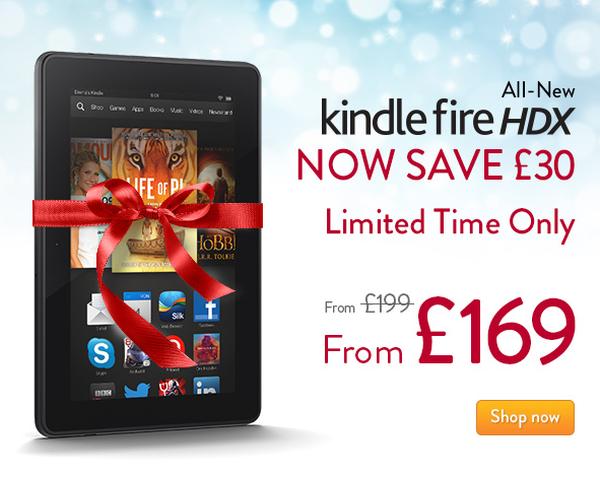 We are at that time of year again when many will be looking to pick up a bargain or two for gifts for someone special or even ourselves, and now the Amazon Kindle Fire HDX 7 price has been dropped just in time for Christmas.

Only a few days ago we told you how one UK retailer was discounting the price of the iPad mini and Samsung Galaxy Tab 3, which was priced at only Â£99 with Amazon soon following and offering the tablet PC for the same price with it still available now.

Meanwhile the online retailing giant has cut the price of its Kindle Fire HDX 7 tablet PC for UK consumers to Â£169 for the Wi-Fi only model. The company has been sending out emails detailing the offer which once clicked reveals the deal is available until Thursday January 2nd.

To quickly recap your money gets you a device with a 7-inch display at a resolution of 1920 x 1200 and 323ppi pixel density, which is powered by the Qualcomm Snapdragon 800 quad core processor running at a clock speed of 2.2Ghz and coupled with 2GB of RAM.

This deal is for the 16GB version of the tablet PC which also has a front facing 1.2-megapixel camera that is capable of 720p HD video capture. US consumers are not at the time of writing being offered any money off the device which starts at $229.

Will this price drop tempt you with the Amazon Kindle Fire HDX 7?