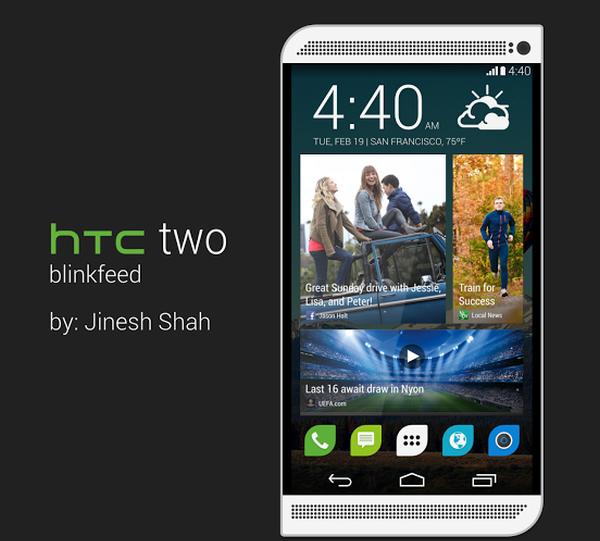 The first major new smartphone release for 2014 is widely believed to be the replacement for the HTC One, which has led to lots of speculation and supposed leaks in the last couple of months, and with this in mind we have an HTC M8 render that has been imagined with HTC Sense 6.0.

We often bring our readers new concept phone ideas from a variety of designers and today’s one comes courtesy of Jinesh Shah, and is his idea of the HTC M8, which is expected to be released by February and be the replacement for the HTC One.

The handset has Android 4.4 KitKat on board along with the HTC Sense 6.0 overlay, and as you can see this design has two opposite corners that are rounded off while the other two are squarer. We still have the two front facing BoomSound speakers that proved really popular on the HTC One.

Previous rumours about the specifications for the HTC M8 have included a 5-inch Full HD display powered by the quad core Qualcomm Snapdragon 800 processor with 2GB of RAM, although there has been some talk that HTC may go for the newer Snapdragon 805 chip instead.

The new handset is expected to make its debut in February at the Mobile World Congress event taking place in Barcelona, Spain that kicks off on the 24th running through until the 27th. The HTC One has helped put the company back on the map in the Android world and many will be interested to see how HTC build on its success going forward.