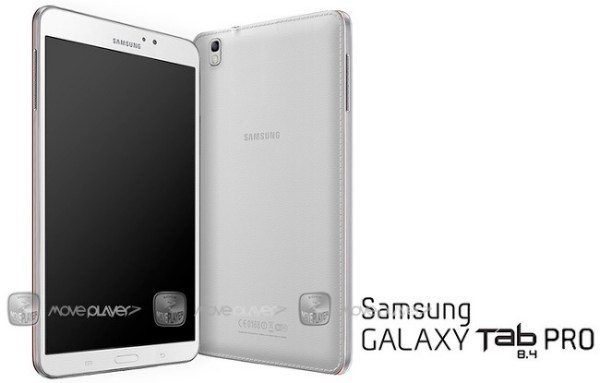 There has been plenty of talk lately about various upcoming Samsung tablets and one of these is the Samsung Galaxy Tab Pro 8.4. A device with model number SM-T320 recently appeared at the FCC and it’s thought that this is the Galaxy Tab Pro 8.4. Now the tablet including a faux leather backing has been envisioned.

Very little is known so far about the Galaxy Tab Pro 8.4 but expectations include an 8.4-inch display, 16GB of internal storage, and LTE connectivity. A release date of week 6 in 2014 has also been touted, but nothing is yet confirmed.

Given the leaked release timeframe, it does look as though Samsung could unveil the Galaxy Tab Pro 8.4 at CES in Las Vegas, which runs from January 7 through 10. Therefore we could be hearing much more about this tablet very soon.

The FCC filing of model number SM-T320 gave an outline of the device, and given this information a concept design of the Galaxy Tab Pro 8.4 has been created by Moveplayer (Google Translated). Buyers of the Galaxy Note 3 smartphone have been very positive about the faux leather backing of the handset, and so the same reverse features in the concept render of the Tab Pro 8.4 tablet.

We think this Galaxy Tab Pro 8.4 concept design looks pretty good and Samsung could do a lot worse than to produce something that looks like this for the real deal. However, we’d like to know what you think.

Are you a potential buyer for the Samsung Galaxy Tab Pro 8.4 tablet, and if so would you like it to look similar to this concept design? Send your comments to let us know.