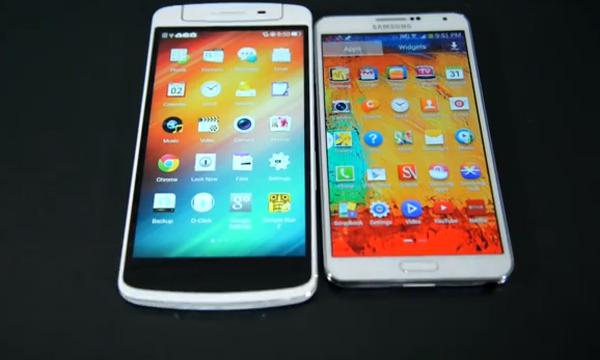 It has been a while now since Samsung brought the mobile world the original Galaxy Note that started the craze for larger sized smartphone devices from a variety of manufacturers, and today we are looking at the Samsung Galaxy Note 3 vs. Oppo N1 in a phablet video battle.

The latest contender to the phablet crown the Oppo N1 was released almost a month ago in some regions while the Samsung Galaxy Note 3 got a bit of a head start on its rival by being released earlier, and already having a solid fan base for the series of handsets.

Since its release the Oppo N1 has quickly gained some fans for its huge display and solid build quality among its plaudits, but it has a tough act to follow in the form of the much loved Galaxy Note 3. The video we have for your viewing pleasure below is pitting the handsets against each other to see the pro and cons of each device.

We start off with the reviewer stating that he is a fan of the Oppo N1 and comments on how well built the device is, but goes on to admit he is not a fan of the Galaxy Note 3. Spec wise the Note 3 beats its rival in almost every area except the front facing camera before we get a quick run down of the specs for each device.

One thing that isn’t liked about the Oppo N1 is the lack of support for expanding the internal storage of the device which has always been an option with the Note series of handsets. The LCD screen on the N1 does give a slightly more washed out feel compared to the Note 3 but it wins out when using the device in bright light outdoors.

The images on the 13-megapixel camera on the N1 are pretty good but not as good as the Note 3, but you have the option of swivelling the camera module around. The reviewer mentions that the Note 3 feels like a toy after you have had the N1 in your hand, but the device is huge and heavy with it and a build that feels more like a humvee.

The reviewer feels that Samsung TouchWiz can often be a little like buying Windows Vista Ultimate due to the amount of apps, but with the sound effects turned off can feel like a good Android skin. The Oppo N1 runs two firmware’s with the first one being Android 4.2 ColorOS which is the company’s own custom Android skin.

What many people like though is the CyanogenMod firmware which opens up a number of possibilities to owners of the handset for some cool customization. In real world tests the Note 3 was a little quicker than the N1 when opening the same applications and this is repeated when it comes to gaming.

The Samsung S Pen rightly comes in for a lot of praise before the reviewer gives his verdict on the outcome of the comparison which we won’t spoil for you.

Do you like the look of either of these phones?