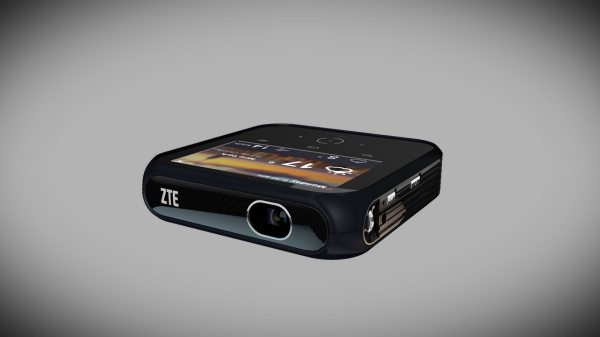 If you own a smartphone, tablet or laptop you know for sure that WiFi hotspots are a must to connect to the worldwide web, most devices have displays that are nice but then they are not projector size are they! So how about a new all-in-one device that provides the best of both worlds?

A project with a built-in hotspot has been achieved by ZTE, say hello to the new ‘ZTE Projector Hotspot’, this little device packs a punch and offers the user a Wi-Fi hotspot via LTE where 8 users at once can use it as well as being able to project videos and images etc up to 120-inches.

The ZTE Projector Hotspot device main features include a 4-inch 800 X 480 display (Looks like a miniature mobile smartphone with a built-in projector and hotspot), it also comes with Android 4.2 OS and the ability to connect many devices such as smartphones, laptops, tablets via Wi-Fi Direct or HDMI.

The little gadget is only 4.7 x 4.7 x 1.1-inches in size, which means it is highly portable. It will be released in USA in 2014 (No exact date or price as of yet). This is a great little device if you want to do presentations without the need to carry cumbersome accessories, love the fact it can handle up to 8 clients at once gaining a fast 802.11 b/g/n network running at 4G LTE speeds.

For more information please read the official press release, the ZTE Projector Hotspot can be seen at CES 2014 at the South Hall 4, booth 31431.

Has the ZTE Hotspot Projector device got what it takes to be successful?