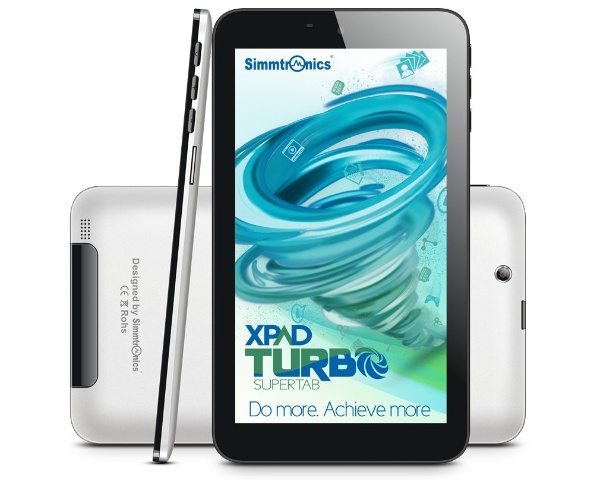 This 7-inch tablet features voice calling and is now available from leading stores in India that sell Simmtronics devices, although it was previously on sale at some online retailers. The official Xpad Turbo price is Rs. 7,999 and specs include a 1.2Ghz dual-core processor, Mali-400MP graphics and 7-inch display with resolution of 1024 x 600.

Other specs include 512MB of RAM, 4GB of internal storage (expandable via microSD to 32GB), a 2-megapixel rear camera and VGA front-facing camera. It has 3G connectivity, a 2800 mAh battery offering around 4 hours of web browsing, 3 hours of video playback or 140 hours standby.

It runs the Android 4.2 Jelly Bean operating system and the Xpad Turbo is a dual-SIM (2G+3G) with dual standby tablet, and has Wi-Fi, Bluetooth, and aGPS. It weighs 273g and is 8.5mm thick and features FM Radio, built-in speaker and 3.5mm audio jack.

Speaking at the official launch Simmtronics Managing Director Indrrajit S Sabharwal described the Xpad Turbo as an “all-in-one workhorse,” aimed at students and professionals. We’d like to know what you think of this new Simmtronics tablet.

Would you consider buying the reasonably priced Simmtronics Xpad Turbo tablet? Why not drop us a line to tell us.