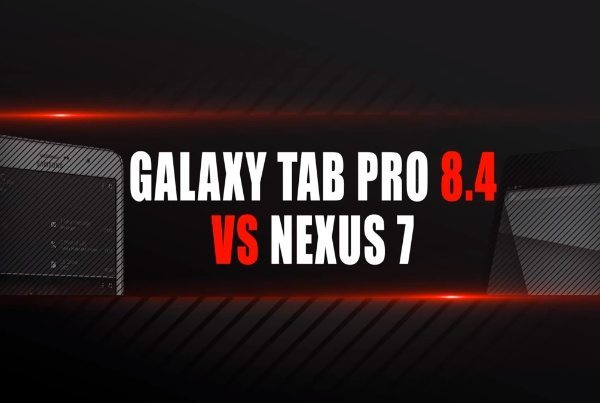 There are some amazing tablets available on the market but new ones are joining them all the time. The Google Nexus 7 2013 has been extremely popular but Samsung recently announced it’s upcoming Pro tablets, one of which is the Galaxy Tab Pro 8.4. Today we want to show a video comparison of the Nexus 7 vs. Samsung Galaxy Tab Pro 8.4 that shows the highpoints of each device.

Both of these tablets have plenty to recommend them, although with the Galaxy Tab Pro 8.4 being newer it has higher specs. Of course it will also have a more expensive price tag. We’ll highlight just a few of the key specs of each before we move on to details of the video that shows the best points of each device.

The Samsung Galaxy Tab Pro 8.4 has a 2.3GHz Snapdragon 800 quad-core processor, 8.4-inch Super Clear LCD display with resolution of 2560 x 1600, 2GB of RAM and 16 or 32GB of internal storage (expandable via microSD to 64GB). It has an 8-megapixel rear camera, 2-megapixel front-facing camera, and 4800 mAh battery, and when it releases it will be running Anrooid 4.4 KitKat out of the box.

One thing that we’ve often noticed is that when trying to choose between two devices readers often have very different requirements and some things are much more important to one buyer than another. The YouTube video that we’ve embedded below could help out if you are trying to choose between these two tablets as the plus points for each are displayed very clearly. (Although the video is labelled as the Galaxy Tab Pro 8.3 this is an error and the tablet is in fact the Galaxy Tab Pro 8.4).

The first part of the video shows the superior points for the Samsung Galaxy Tab 8.4 over the Nexus 7. There are 15 aspects in total, just some of which are the larger battery, 60fps video, IR blaster, larger display, fast Wi-Fi ac, and microSD card slot. We won’t list them all here as you can check out the video for yourselves.

The second part of the video shows the plus points for the Google Nexus 7. There are 5 points highlighted here and they include a cheaper price tag, stock Android, and direct updates. At the end of the video we see the highpoints of each tablet listed alongside each other to give a clear idea of what these tablets have to offer.

After you’ve taken a look at the video below we’d be interested to receive your comments. Would you rather have the affordable Nexus 7 now, as the specs are more than adequate for you? Maybe you are prepared to pay more for the Galaxy Tab Pro 8.4 when it becomes available?