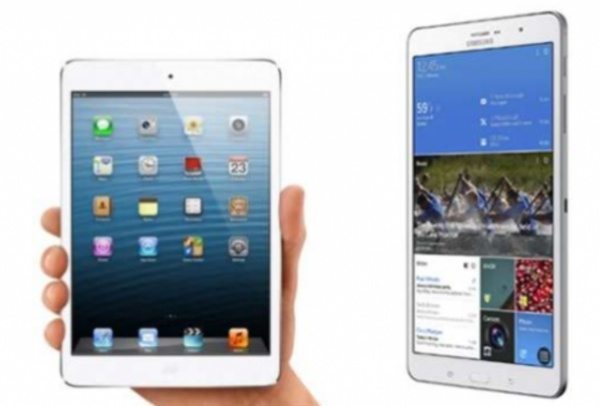 The iPad mini 2 is widely available across the world while the new Galaxy Note Pro and Tab Pro tablets from Samsung have just been introduced. The smallest of these is the Galaxy Tab Pro 8.4, so it makes sense to consider this as an alternative to the iPad mini 2. The incoming Samsung tablet is due to release at some time in the current quarter. We’ll highlight the key specs of each.

Processors
The iPad mini 2 has a 1.3GHz Apple A7 dual-core processor and PowerVR G6430 graphics. The Galaxy Tab Pro 8.4 is powered by a 2.3GHz Qualcomm Snapdragon 800 quad-core CPU and Adreno 330 GPU.

Price
The iPad Mini 2 starts from $399/Â£319 for the Wi-Fi version with 16GB of storage and goes right through to $829/Â£659 for the Wi-Fi + Cellular model with 128GB of storage. The price of the Samsung Galaxy Tab Pro 8.4 has not yet been made official but unconfirmed price rumors put it from around $400.

Obviously as this is a straightforward specs comparison we haven’t gone into detail about the many various features offered on each tablet. However, this should give readers a good idea of what they each have to offer.

It will certainly be interesting to see the confirmed Samsung Galaxy Tab Pro 8.4 price as we will then have a better idea of how great the competition might be between these two notably impressive tablets.

Are you thinking of purchasing either of these tablets? If so do you think you’ll buy the iPad mini 2 or the newer Samsung Galaxy Tab Pro 8.4 if the price is right? Let us know with your comments.