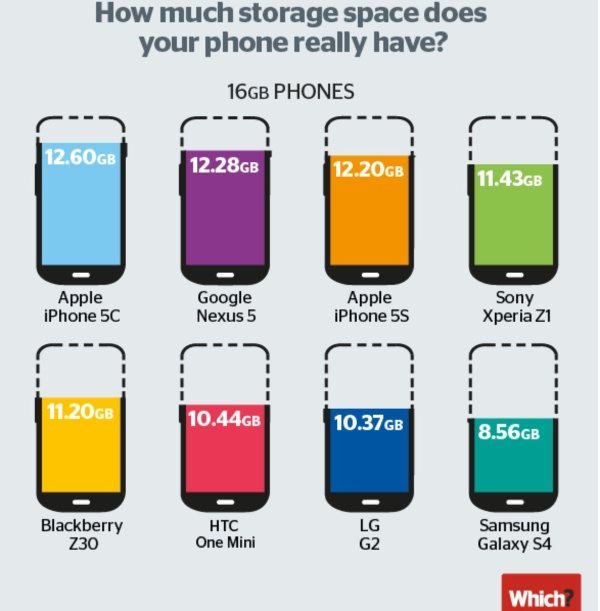 If internal storage is an aspect that’s important to you when buying a new smartphone then you might be very interested in a new report looking at storage space in 16GB models. We’re taking a look at the iPhone 5C vs. Samsung Galaxy S4 for available storage space, and you might be surprised that one of these fares particularly well while the other is a storage hog.

It’s a well-known fact in the tech industry that many phones that have advertised internal storage of16GB actually have less user available space than that. However, not all consumers are aware of this and may be surprised at how much of the space is already taken up.

A new Which report shows that the iPhone 5C and iPhone 5S are two of the top three devices for offering the most advertised space. However, in very last place of the phones looked at is Samsung’s Galaxy S4 flagship.

The iPhone 5C actually ranked first for its amount of available storage with 12.6GB out of 16GB user available. This equates to 79% of the space advertised. The iPhone 5S came in third position with 12.2GB of available capacity, or 76%.

That’s pretty shocking considering the GS4 is a dominant force in the Android market and many Galaxy S4 owners might be surprised or even alarmed to hear this. Part of the reason for this lowly figure is thought to be the amount of customized software on the phone such as eye tracking features and Samsung’s TouchWiz user interface. On the plus side the Galaxy S4 does have expandable storage to 64GB via microSD, and this is something that the iPhones and the Nexus 5 don’t offer.

This available storage news might not be a surprise to some, as Samsung previously faced criticism about the amount of user available storage on the Galaxy S4. At that time the company’s response was to urge owners to buy a microSD card, which wasn’t the best customer service move ever made, although Samsung later backtracked on this.

We’re very interested to find out what readers think of this news. Do you think that manufacturers should be doing more to make sure advertised storage space is at a maximum? Are you surprised that the iPhone 5C came out best in this report while the Samsung Galaxy S4 languished in last spot? Do send us your comments on this.