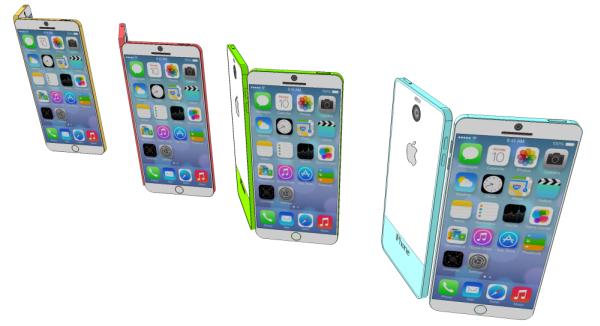 Last year Apple launched two versions of its smartphone with the company believed to be doing the same thing again this year, and today we have an iPhone 6C design for you that has been imagined with colour and a larger screen size.

We have heard lots of talk about multiple iPhone devices being released this year with larger screen sizes, and the image that you can see on this page is a concept iPhone idea by designer Dani Yako. We are dealing with a handset that has a 4.7-inch Full HD IPS LCD touchscreen display, which is housed inside a form factor measuring only 6.5mm thick and weighing 120 grams.

Of course the new iPhone 6C is running the iOS 8 operating system using a new Apple A8 64-bit processor that will probably be made by Samsung again. This is paired with a PowerVR G6430 graphics GPU and 3GB of RAM, while there is also 128GB of on board storage.

On the rear of the device we have a 12-megapxel camera paired with an LED flash and equipped with OIS, voice activation, and HDR. There is Full HD video capture available at 60fps along with HDR, and around the front there is an 8-megapixel unit for video calling and self portraits.

It remains to be seen if Apple does supply an iPhone this year with a display of this size, but there is a lot of hope among fans of the company that it at least goes up to 4.5-inches.