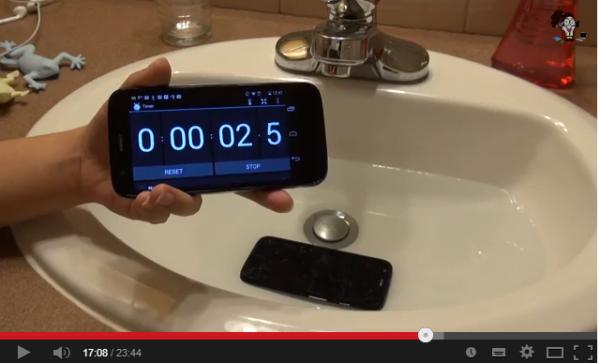 We have got used to Sony in the last few months releasing new smartphones that provide some level of dust and waterproofing, but now we have the Motorola Moto G that survives the water treatment in a video review.

The Motorola Moto G has been well received since it first became available as it offers some worthy specifications at a low asking price. When the handset was first made official the company revealed that the internal components had been treated to a nano coating that would provide some level of waterproofing.

Now the video below this page has been put up on YouTube by Erica Griffin, and sees the Moto G go through a couple of tests being submerged into water. The first test sees the handset fully submerged in water for 15 seconds while an audio book is playing.

It stops playing and it soon becomes apparent that the speaker has a lot of water in it due to the sound, but other than that the display is still working, and once the rear cover has been taken off and the water wiped away from the speaker it works correctly.

The cameras are also working as they should and a call is successfully made with the handset, before we go onto another test but at 30 seconds with the handset swished around in the water. The screen is wiped off and the rear cover removed before drying it all off with a towel, and the handset restarts itself.

No water is seen underneath the display or rear camera but the display is having a little difficulty, but the battery is not getting hot. The phone then goes into a boot loop before not restarting at all, but after banging all the water out of the handset it comes back to life.

Everything starts to work again and a call is even made and a game is tested before we move onto a test for 30 minutes. The handset is taken out of the water and dried off before being switched on again with the display working and both cameras not having any water in them.

The handset receives a Wi-Fi and 3G reception but the speaker doesn’t work at first while everything else is working as it should, and it makes a phone call when the speaker comes back to life but not for other things.

Eventually the speaker starts working again and then the handset is left overnight before it is tested again the next day, but we won’t spoil this bit for you. Obviously we don’t recommend that you do this to your own Moto G though as it might not turn out the same way.

Are you impressed with the handsets performance?