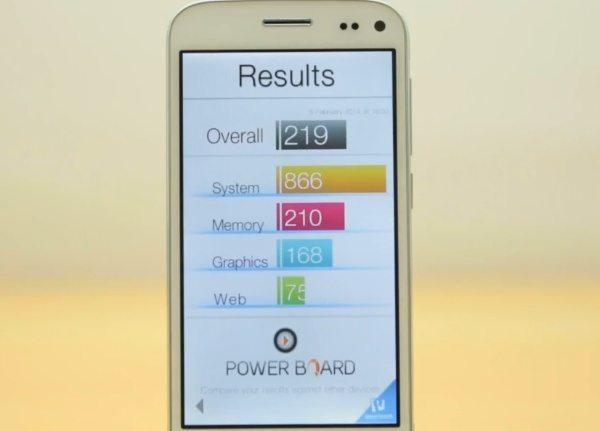 The Micromax Canvas Turbo Mini A200 recently released in India and is likely to be another hit for the popular brand. There seem to be an increasing amount of mini versions of flagship devices, and they can be a good option for those who like a smaller form factor. If you’re wondering how it performs, today we have Micromax Canvas Turbo Mini benchmarks shown and compared.

We’ve previously informed readers about the specs and price of the Canvas Turbo Mini and also shown an unboxing and first thoughts of the handset, so check those out at the links if you want to know more. The 3-minute YouTube video that we’ve embedded for you beneath this article shows benchmark tests being performed.

The Canvas Turbo Mini is put through GFXBenchmark, NenaMark, Basemark OS II, AnTuTu Benchmark, Vellamo, Quadrant Benchmark, and Linpack testing. You’ll see each test being conducted and individual scores along the way, and at the end of the video all of the scores are shown together.

The results have also been compared with many of the other popular smartphones on the market, including handsets such as the full-sized Canvas Turbo, Micromax A116, Samsung Galaxy Grand 2, Xolo Q2000, Intex Aqua HD, Sony Xperia C, Gionee Elife E5, Lava Iris Pro and more.

In many of the tests the Micromax Canvas Turbo Mini performs incredibly well, coming top in Quadrant, Vellamo 2.0, Linpack Multi-thread and only slightly further down in the other tests. You can see every result comparison shown at Fone Arena.

Check out the video of benchmarking below and afterwards we’d really like to hear your views on the Micromax Canvas Turbo Mini. Have you been considering buying this smartphone? Maybe you’ve already purchased it and could tell us what you think of the device? Send your comments to let us know.