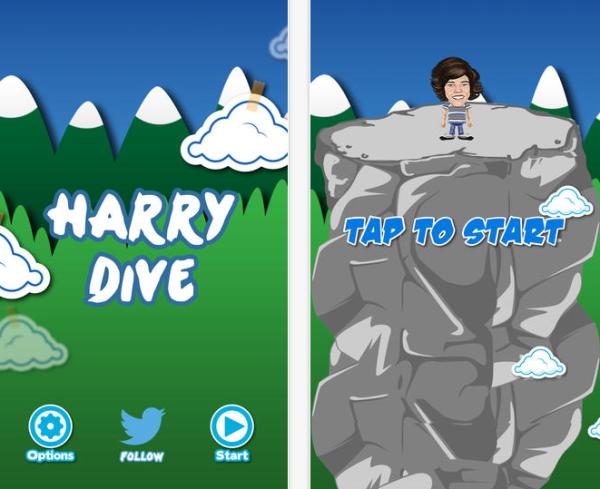 It is not unusual now for big name personalities to endorse certain brands or other services, and this is becoming more apparent in the mobile world with applications. Today we have news of the Harry Dive One Direction iPhone game that has recently been released.

If you have a teenage daughter you will probably be aware of the boy band One Direction, and now a new game that is linked to the band has been released onto the App Store by JH Digital Solutions. The game sees players taking control of Harry Styles as he attempts to dive from a cliff, and it is your mission to navigate him down the cliff face by simply tapping left or right.

As he travels down Harry will collect coins while trying to avoid obstacles, and power ups are also available as he tries to land in one piece using a parachute to finish the level. Users can take on their friends by trying to get the highest score, and the game has 36 different levels to complete.

There is also Game Center leaderboards integration with Harry Dive – Harry Styles 1D edition being available free on the App Store for owners of the iPhone, iPod Touch 5G, and iPad running iOS 7 or later. Check out the demo video we have embedded below.