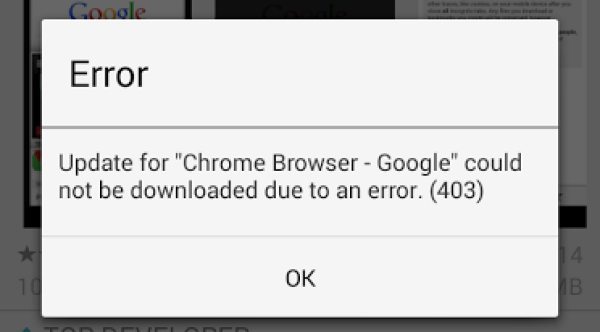 Android users have been getting the Google Play 403 error of late and it is apparently causing a few worries, if you visit Twitter you will see many tweets of the 403 error occurring – So what is this about and what should we do?

Frustrated users say that they are receiving the 403 error when trying to download an app via the Google Play Store, when they try to download an app this is when the error message pops up on there screen just like the one shown in the image below.

No only does it stop app downloads it also prevent app updates from Google Play; we would say not to worry too much because Google is very prompt when it comes to these sort of problems.

The 403 error basically means a request is forbidden, there is nothing wrong with your Android device so please do not start ripping your hair out, it just means the server was programmed to reject the request you sent. Problems like this normally irons itself out rather quickly, some users have tried different tactics.

A few Android users have told us that if you delete and then re-add your Google account this will fix the issue, Phones Review recommend you DO NOT try this as sometimes it causes more hassles, just sit it out if you are still getting the error 403.

One user said, “Just upgraded my moto g to 4.4.2 via OTA (was on 4.3) and then factory reset. Now have 403 issues. My nexus 7 is fine though. So assume it must only be happening to devices classed as ‘new’, eg devices that have just had a google ID setup on them.”

Are you getting the Google Play 403 error?