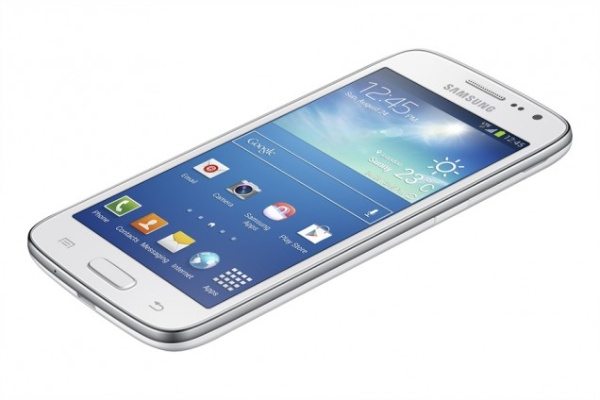 Samsung has just launched another in its Galaxy lineup of smartphones with the just announced Galaxy Core LTE. This obviously features LTE connectivity and in some regions it may be called the Galaxy Core 4G. The Samsung Galaxy Core LTE will be available in several world regions and we have more details ahead.

Earlier today Samsung announced the Galaxy Core Advance for South Korea and now the Galaxy Core LTE follows hot on its heels. Although Samsung hasn’t announced specific regional availability yet, the company does say that the phone will definitely be available across Europe, Russia and some countries in Asia.

The design is not unlike that of the original Galaxy Core and it comes in black or white color options. It features LTE Category 4 offering download speeds of 150 Mbit/sec, and other connectivity options include 3G, Wi-Fi 802.11 b/g/n, Wi-Fi Direct, Bluetooth 4.0, DLNA, USB 2.0 and NFC.

Further Galaxy Core LTE specs include a 1.2GHz dual-core processor, 4.5-inch display with resolution of 960 x 540, 1GB of RAM, and 8GB of internal storage, expandable via microSD to 64GB. It also has a 5-megapixel rear camera with autofocus, LED flash and Full HD video capture, and a VGA front-facing camera.

The phone has a 2100 mAh battery and runs the Android 4.2.2 Jelly Bean operating system. It also includes features such as ChatON, Easy Mode, Easy Text, S Beam, S Translator, S Travel, S Voice and more. We’ve heard no mention of price or a release date yet, but we’ll pass on that news when we hear it. Dimensions of this handset are 132.9 x 66.3 x 9.8 mm.

Does the Samsung Galaxy Core LTE sound like a phone you would be interested in? How much would you be prepared to pay for this handset when it releases? Let us know with your comments.