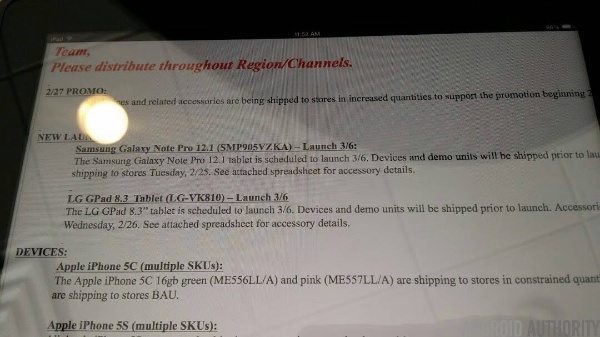 If you’ve been hoping to see the LG G Pad 8.3 tablet or the Samsung Galaxy Note Pro 12.2 arrive on Verizon then we have some rather nice news for you. A leaked memo from within the company gives an unconfirmed release date of March 6 for these 4G LTE devices.

We had previously thought that a Verizon LG G Pad 8.3 was in the offing, following a leaked image of the device with the carrier’s branding. This new leaked document appears to verify that.

It shows that stores will soon be offering the LG G Pad 8.3 (LG-VK810) and Samsung Galaxy Note Pro 1.2 (SMP905VZKA), as well as receiving demo units and accessories for the tablets before the release date given above.

There’s no news yet on Verizon pricing for the LG and Samsung tablets but we’ll give you a refresher of specs. The LG G Pad 8.3 has a 1.7GHz quad-core processor, 8.3-inch display with resolution of 1920 x 1200 and 273 ppi, 2GB of RAM and 16GB of internal storage, expandable to 64GB via microSD.

The Note Pro 12.2 has an 8-megapixel rear camera, 2-megapixel front-facing shooter, 9500 mAh battery and runs Android 4.4 KitKat. It also has use of the S Pen stylus.

While we cannot take this leak as confirmation of these LTE tablet releases, it certainly look very promising and we would expect Verizon to officially announce them soon. Have you been waiting for the LTE Galaxy Note Pro 12.2 or LG G Pad 8.2 to be offered by Verizon?