Sony Xperia G could be closer to release 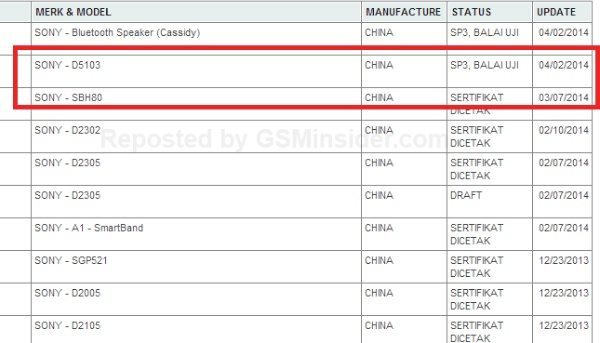 It was back in February that we first heard leaked details of the Sony Xperia G, but although we hoped to see it officially introduced at MWC 2014 that failed to occur. However, the Sony Xperia G now appears to have made another appearance, so it could be closer to a release.

POSTEL is the FCC equivalent for Indonesia and has posted a Sony device with model number D5103 on its website. This is though to be the mid-range Xperia G, which sounds like it fits in the same sort of bracket as the Motorola Moto G as far as specs are concerned.

According to benchmark results, specs for the device include a Snapdragon 400 quad-core processor with Adreno 330 graphics, a 4.8-inch display with resolution of 1280 x 720, 8-megapixel rear camera and 1.3-megapixel front-facing shooter. It’s thought that it will run Android 4.4.2 KitKat out of the box.

It will be interesting to see this handset confirmed although it’s not anticipated that it will be dustproof or waterproof unlike some of the other recent Sony smartphones. Are you waiting to hear official news on the Sony Xperia G?