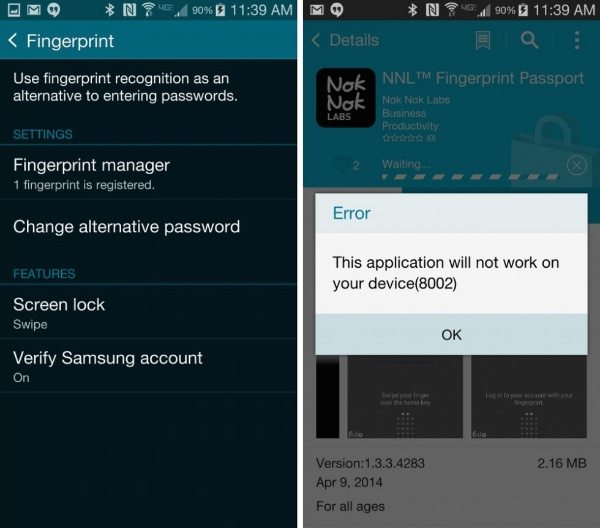 The Samsung Galaxy S5 is now making its way into the hands of eager consumers and one of the new features is the fingerprint scanner. Many people may be planning to make use of digital purchases with the use of this feature, but sadly we have to tell you that if you have a Verizon Samsung Galaxy S5 the PayPal fingerprint support has been disabled.

Only a day after PayPal’s fingerprint authentication system was announced as live for those in 25 countries, it has been reported that those who buy (or have already purchased) the Galaxy S5 on Verizon won’t be able to use this. Swiping down on a home button is used to authenticate PayPal digital purchases, and this adds some nice functionality to fingerprint sensors. However, at this stage it’s not known why Verizon has disabled this on its carrier model of the S5.

Early owners of the Galaxy S5 on Verizon who have attempting to set-up this feature using an app, have been faced with a message saying that it will not work with this device, although other carrier models still appear to have this functionality. It’s worth pointing out that the Finger Scanner of the Galaxy S5 can still be used for unlocking the phone, and the Google Wallet service works.

Interestingly, Verizon, AT&T and Sprint have also disabled the Download Booster feature on the Galaxy S5, leaving T-Mobile as the only one of the big 4 US carriers to offer the Galaxy S5 with all of its features working. Have you already purchased the Samsung Galaxy S5 on Verizon, and if so are you disappointed that PayPal fingerprint support has been disabled? Maybe this would be enough to put you off buying the phone, or perhaps you’d consider jumping ship to a different carrier?