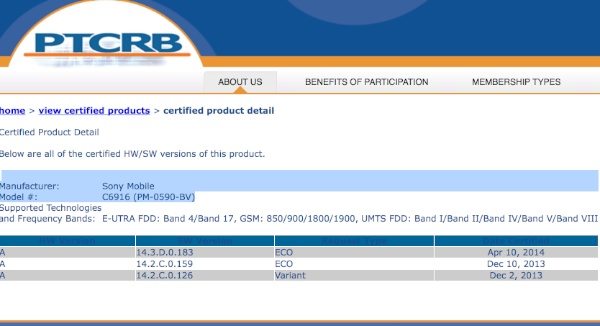 We always like to bring readers news about operating system updates for different devices, and today if you have the Xperia Z1s there’s some promising news. The Sony Xperia Z1s for T-Mobile has been languishing on Android 4.3 Jelly Bean since its release, but there are now signs that the Android 4.4 update could soon be on the way.

The global edition of the Xperia Z1 has already received the KitKat update in the form of Android 4.4.2, but things have been pretty quiet about T-Mobile’s Xperia Z1s. However, PTCRB certification for model number C6916 is now showing that firmware build 14.3.D.0.183 was certified on April 10th.

The build number moves on from 14.2.C.0.159, so this could well be the Android KitKat update in the pipeline, although at this stage there’s no way of telling. However, this new update could start being pushed out very soon, so hopefully it won’t be too much longer until we know for sure whether this is Android 4.4.2 at last. Have you been waiting for Android KitKat on your Sony Xperia Z1s?