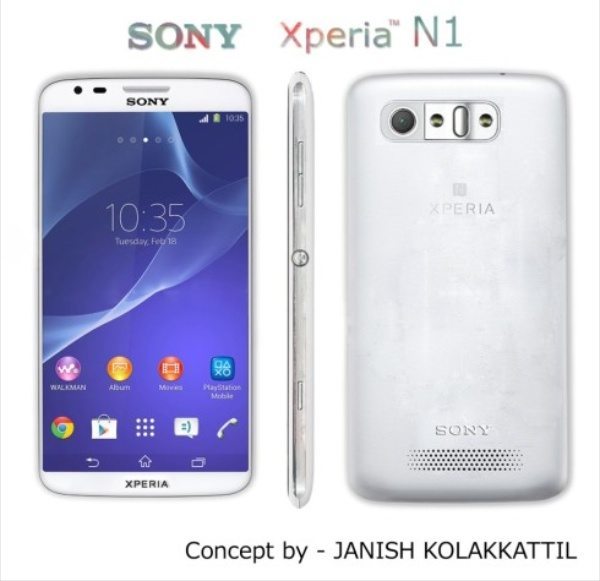 From time to time it can be interesting to look at concept smartphone designs, to tantalize us with future possibilities for devices. Today we have a Sony Xperia N1 design to share, but this one doesn’t exactly excite us, although we’d like to know what you think?

We see many concepts of upcoming well-known devices such as the iPhone 6 and Galaxy Note 4, and sometimes the specs provided can be rather futuristic. In the case of this Xperia N1 though, we’re looking at more of a mid-range device which doesn’t exactly have the wow factors, although we liked the designer’s previous concept of an Xperia N.

Included specs with this concept design from Janish Kolakkattil are a 1.5GHz Snapdragon S4 Plus dual-core processor, Adreno 440 graphics, 4.5-inch display with resolution of 1280 x 720, and 8GB of internal storage, expandable via microSD. It runs Android 4.4.2 KitKat with the X Reality Engine.

Connectivity options of this dual SIM device include 4G, NFC, and microUSB 2.0, and it has a 1850 mAh battery. There’s a 13-megapixel rear camera with dual LED flash as well as a 2-meagpixel front-facing camera, while color options are black, purple, red, white, or yellow. Tell us what you think of this Sony Xperia N1 design by sending your comments.

One thought on “Sony Xperia N1 design fails to excite”