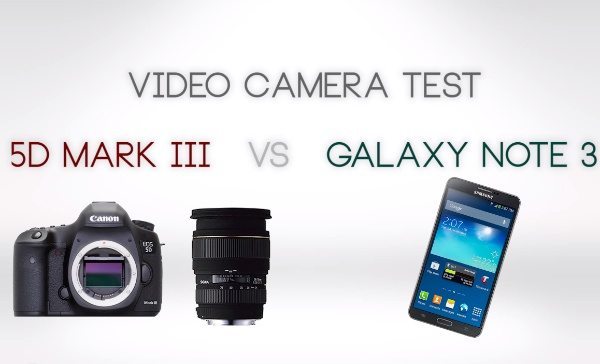 It’s no secret that camera capabilities of high-end smartphones are improving all the time, and this is becoming an increasingly important factor when choosing a new device. The Samsung Galaxy Note 3 has a lot to recommend it, including a 13-megapixel camera with 4K video capture capability. Now its video performance has been put to the test in a Samsung Galaxy Note 3 vs. Canon EOS 5D Mark III DSLR video comparison.

The Canon camera is a top-notch full-frame 22-megapixel DSLR featuring a SIGMA 24-70mm f/2.8 lens and photographer Alec Weinstein decided to compare the two devices in a video recording test. It should be pointed out that Weinstein did some editing to the videos such as adjusting contrast, sharpening and saturation as well as some other tweaks such as exposure for the Mark III footage, in order to provide a better comparison to the look of the Galaxy Note 3. The full test parameters are shown at the beginning of the comparison.

The video footage was captured at 1080p on the Mark III while it was downsized to 1080p from 4K for the Galaxy Note 3 and the different clips were taken in daylight for the best results. The YouTube video that you can see below our story shows the resulting footage of both devices simultaneously and for the first 15 seconds or so you won’t know which device took which footage so that you can form an initial unbiased opinion about which you prefer.

Several different samples of footage are shown, each time giving the viewer the chance to work out which is which, and although we don’t want to give too much away the results will surprise many. There’s also a bonus round towards the end of the test with the 5D Mark III raw as an extra point of interest, along with some other observations. Finally you’ll see a list of pros and cons for each device in the conclusion.

This offers a really intriguing look at the video capabilities of these devices and it’s worth bearing in mind that the Canon EOS 5D Mark III camera will set you back around $3,500 as opposed to the approximate $750 of the Samsung Galaxy Note 3. When you’ve checked out the full video embedded below we’d be really interested to hear which device you think offers the best results, so do send us your comments.