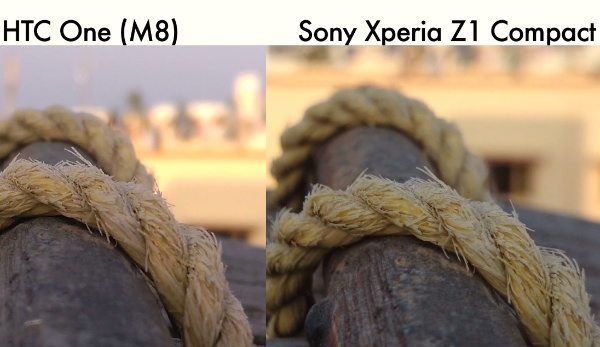 Camera capabilities are an increasingly important factor for many people buying a new smartphone, and so it’s always good to compare the performance of one handset against another. Today we have a video to share that shows the HTC One M8 vs. Sony Xperia Z1 Compact camera results and it would be interesting to hear which you think achieves the best quality images.

The HTC One M8 features a Dual 4-megapixel UltraPixel main camera with autofocus, dual-LED flash, video stabilization, and video capture of 1080p@60fps or 720p@60fps. It also has a 5-megapixel front-facing camera. On the other hand the Sony Xperia Z1 Compact has a 20.7-megapixel rear camera with autofocus, LED flash, video stabilization and video recording capability of 1080p@30fps, as well as a 2-megapixel front-facing camera.

The YouTube video we have for your viewing pleasure today comes from Fone Arena and you can check it out below this story. The video includes a variety of images of the same scene taken with both phones and shown alongside each other for an easy comparison. Towards the end there’s also some video footage from both phones, which shows how they stack up against each other. You might also be interested in a recent camera performance look at the HTC One M8 against the Motorola Moto X.

We don’t want to influence your decision by saying which device of the two shown in todays video we think offers the best camera results, but we’d be really interested to hear your choice. Will it be the HTC One M8 or the Sony Xperia Z1 Compact?