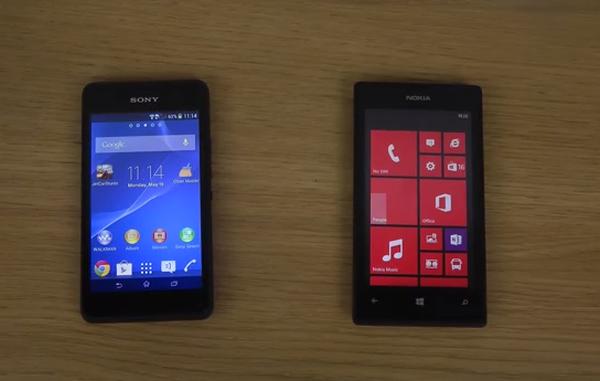 The use of feature phones is almost coming to an end now that there are lots of more affordable smartphones available for purchase, and today we have a Sony Xperia E1 vs. Nokia Lumia 520 speed test comparison video for your viewing pleasure.

We have already seen the Sony Xperia E1 compared spec wise with the Motorola Moto G, but today we see the handset going up against the Windows Phone running Nokia Lumia 520 in a quick YouTube video.

The reviewer demonstrates the screen performance of both handsets that are called pretty average which can be expected at this price range, but has to remove the battery on the Sony to reboot the device that goes into safe mode.

The two devices are then switched on but the Sony Xperia E1 goes into safe mode again, and we do apologize for some of the language that is used, but we won’t spoil the eventual result for you.