Moto G contender in form of the Sony D2403 spotted 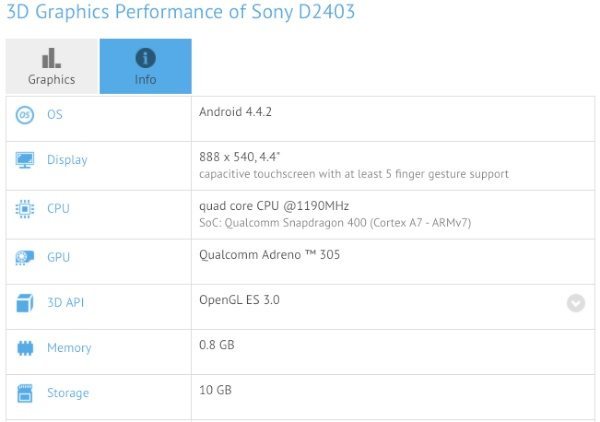 There’s some intriguing news today with the reveal of an unnamed Sony phone that has appeared on a benchmark database. The massively popular Motorola Moto G could have a real contender in the form of the Sony device with model number D2403, if the specs are anything to go by.

The Sony D2403 has gone through GFXBench benchmarking and this has shown up some of the specs. These include a 1.2GHz Snapdragon quad-core processor, Adreno 305 graphics, 4.4-inch display with resolution of 960 x 540, 1GB of RAM and 16GB of internal storage.

It has an 8-megapixel rear camera and 0.3-megapixel front-facing camera, and appealingly runs Android 4.4.2 KitKat. Weighing up what we know so far it’s plausible that the D2403 could even be a Sony Xperia M2 Mini.

A set-up such as this could really challenge the Moto G, although somehow we don’t imagine that Sony will put the D2403 in a similar price bracket to the Motorola handset. We’ll be following this with interest, but do you like the sound of the Sony D2403 smartphone?