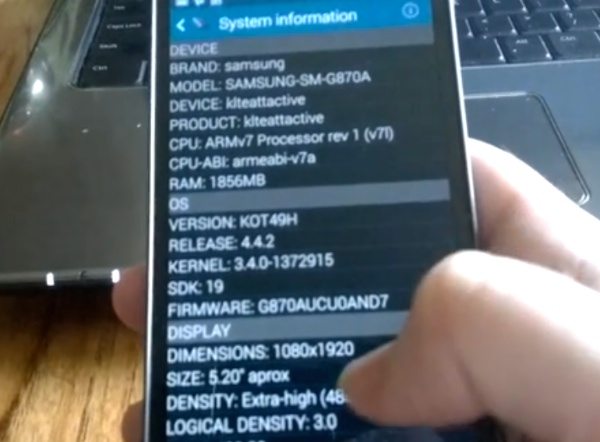 We’ve seen growing signs of a Samsung Galaxy S5 Active on the way, which is likely to be a more rugged version of the Galaxy S5. First we informed readers about a leaked model number and then just a few days ago we shared a video that claimed to show the smartphone itself. Now a new Samsung Galaxy S5 Active video has turned up and this one reveals the display size.

This latest look at what is claimed to be the S5 Active comes from TK Tech News, as did the previous one we saw. The video that you can see at the source link below shows that the phone has a 5.2-inch 1080p display, very slightly larger than that of the standard Galaxy S5. It also gives more info on its waterproof qualities.

When we previously pointed out that the standard Galaxy S5 now has water-resistance, we noted that the S5 Active might step up further on this. The claim on the video is that rather than IP67 certification held by the Galaxy S5, the S5 Active will improve to IP58 certification, the same as for the Xperia Z2. This means it could be submerged in water for more than 30 minutes.

We imagine the Samsung Galaxy S5 Active release can’t be too much further away and we will let you know more as we hear it.