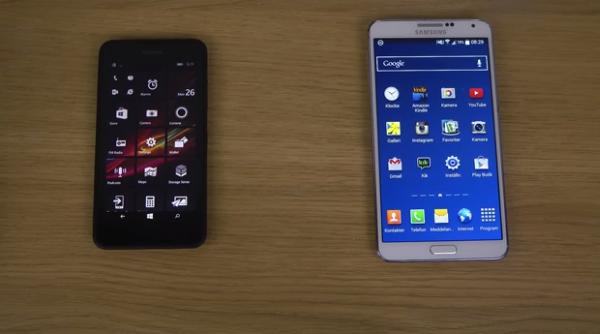 Smartphone comparisons are always popular as there are so many different handsets available for purchase, but the Nokia Lumia 630 vs. Samsung Galaxy Note 3 are now strangely compared.

The Samsung Galaxy Note 3 remains one of the best smartphones available to consumers on the Android platform, while the Nokia Lumia 630 despite its qualities is far from the best handset from Nokia.

Despite this we now have a YouTube video comparing the two smartphones which quickly shows how much bigger the Note 3 is next to the Lumia 630. It has to be remembered though that the Nokia is a more affordable Windows Phone 8.1 handset.

We see how each handset can multitask before Cortana is opened on the Lumia 630 as well as the Samsung S Voice feature, with the same question asked on both devices. The S Pen is demonstrated on the Note 3 before the specs of each device are discussed.

The UI of both handsets are also discussed and briefly demonstrated but watch the full video and tell us what you think of this latest comparison.