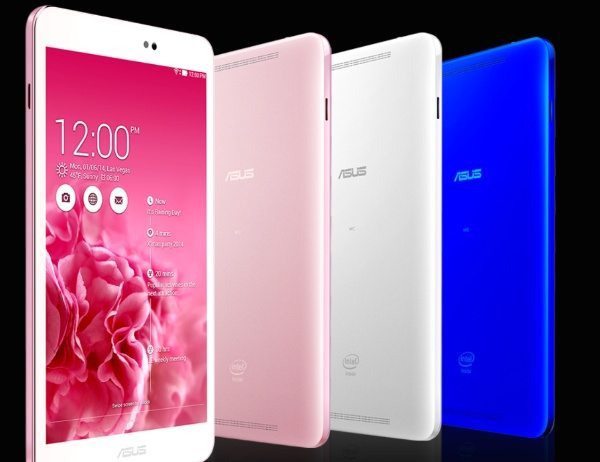 It’s a busy time at Computex 2014 and Asus is offering plenty of unveilings today. We have some details of three of the new tablet devices, as the Asus Fonepad, MeMO Pad 7 and MeMO Pad 8 have all been made official.

All of the above three tablets run Android 4.4 KitKat and they all have 64-bit Intel Atom processors. They also feature the revamped Zen UI, which is touted as having over 1000 software improvements and a new look.

The Fonepad 8 is powered by a 1.8GHz Atom Z3560 quad-core processor and has an 8-inch IPS LCD display with resolution of 1280 x 800. It has 3G connectivity and phone functionality, as well as front-facing dual stereo speakers and ASUS SonicMaster audio. The tablet has extremely slim 5mm bezels.

Finally the MeMO Pad 8 (pictured below) looks set to impress and is claimed to be the “world’s lightest 8-inch LTE tablet.” It weighs 299g and is just 7.3mm thick and features premium metal coating on the chassis. MeMO Pad 8 specs include a 2.3GHz Intel Atom Z3580 quad-core processor, 8-inch 1080p display, Wi-Fi 802.11 ac and LTE.

There’s no news yet on pricing or availability of these three new Asus tablets, but do you have any interest in the Asus Fonepad 8, MeMO Pad 7 or MeMO Pad 8?