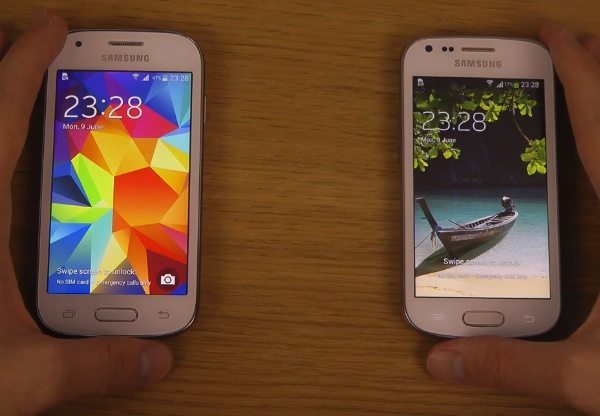 First we’ll give you the key specs of these devices to give you an idea of how they compare in this respect. The Galaxy Trend Plus has a 1.2GHz BCM dual-core processor with Broadcom VideoCore IV graphics, a 4-inch display with resolution of 800 x 480 and 233 ppi, 768MB of RAM and 4GB of internal storage, expandable to 64GB via microSD. It has a 5-megapixel rear camera with LED flash, VGA front-facing camera, 1500 mAh battery and runs the Android 4.2 Jelly Bean operating system.

On the other hand the Galaxy Ace Style (pictured on the left in the image below) has a 1.2GHz dual-core processor, the same size of display and resolution, 512MB of RAM and the same internal storage and level of expansion as as the Trend Plus. It has a 5-megapixel rear camera but no LED flash, a VGA front-facer, and the same capacity battery, but runs the later version of Android, 4.4.2 KitKat.

It’s always good to view a video comparison of two smartphones as you can get a better idea of what they have to offer against each other as well as how they look. The YouTube video that you can watch below this story gives a 6-minute review of these two phones as opposition for each other.

First of all the reviewer notes that these devices have a lot of similarities such as the same size of display and resolution, and you’ll see some close-up looks of the handsets from all angles. The review also points out some of the differences in appearances before many other aspects of these phones are discussed such as user interfaces, menu keys, keyboard layouts and more.