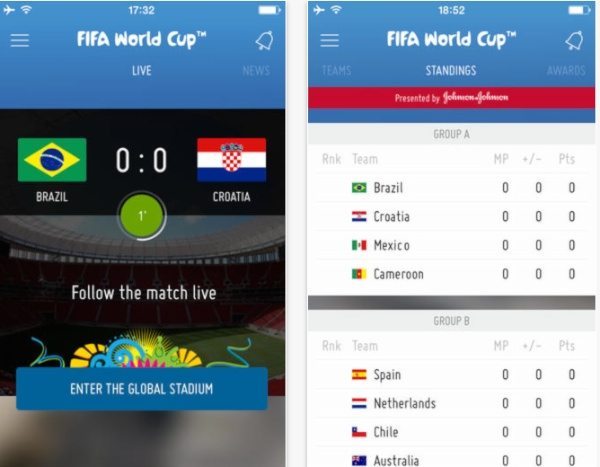 The 2014 Brazil World Cup kicks off in all its glory tomorrow and this football spectacle is loved across the globe. Many of you will be riveted to all of the action over the coming weeks and when you can’t be in front of a TV you can keep up with all of the action via the 2014 FIFA World Cup official apps for Android, iPhone and iPad from Google Play and the App Store.

We’ll be watching the best soccer stars from many countries come together in Brazil and the official World Cup app provides all of the latest headline news about the event with photos, videos and more. The FIFA World Cup Brasil app has just been updated and it’s a free app so it’s well worth downloading it for your mobile device.

The app enables users to follow the games, receive match alerts for their favourite teams, and share the experience with players, coaches, friends and celebrities. There’s a daily Live Blog offering all the latest, as well as exclusive text, video and photo coverage. You can also have a say in voting for the Man of the Match in every one of the 64 games of the World Cup finals, and there’s an opportunity to be the lucky winner of the kick-off balls from the matches.

As well as all this there are profiles of the various players and all 32 teams of the tournament finals, and other features such as exclusive interviews, live scores, and the ability to keep clued up with the latest FIFA/Coca-Cola World Rankings. The Android version of the app is available from Google Play here and it’s compatible with devices running Android 2.3 or later.

The iOS version for iPhone is at iTunes here or for the iPad app head here. Both of these are compatible with devices running iOS 6.0 or later. You may also be interested in news that the Sky Go app recently received an update in time for the World Cup as well as some World Cup case accessories for the iPhone.

Will you be following the World Cup 2014 with the official apps? Why not let us know which team you will be cheering on by sending your comments.