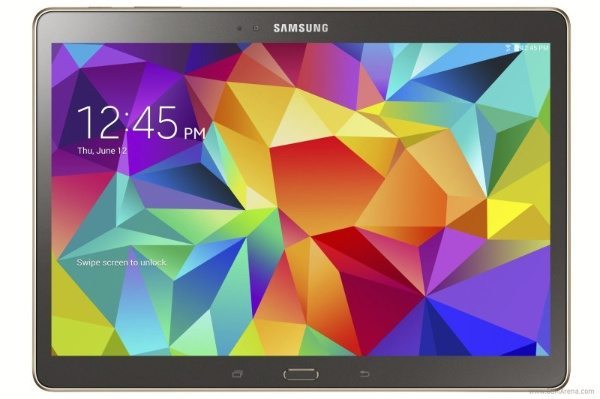 There’s likely to be plenty of demand for the new Galaxy Tab S tablets as they have Super AMOLED displays with 2560 x 1600 WQXGA resolution. This means the 8.4-inch model has pixel density of 359 ppi while the larger 10.5-inch version has 288 ppi. Because Super AMOLED displays are slim it means the tablets are only 6.6mm thick and it also helps to bring the weight down. The Galaxy Tab S 8.4 weighs only 294g or for the LTE version that’s 298g. The Galaxy Tab S 10.5 weighs 465g or just 2g more for the LTE variety.

Wi-Fi versions of the tablets come with a Samsung Exynos 5 Octa processor with quad 1.3GHz cores and quad 1.9GHz cores. The LTE models have a 2.3GHz Snapdragon 800 quad-core processor. The different sizes of tablets both have 3GB of RAM and either 16 or 32GB of internal storage, expandable via microSD to 128GB. They also both have 8-megapixel rear cameras with LED flash and 1080p video capture, as well as 2.1-megapixel front-facing units.

For battery capacity the 8.4-inch Galaxy Tab S has a 4900 mAh battery while the 10.5-inch Tab S packs a 7900 mAh battery. The tablets run the Android 4.4 KitKat operating system skinned with Samsung’s Magazine UX, with features such as S Voice and Multi Window split-screen view. Other advantages for these tablets are a fingerprint scanner built into the Home button and IR blaster as an added bonus. Design-wise the reverses feature the plastic faux leather look of the Galaxy S5 phone.

Pre-orders for these new tablets are already available in the US with the Wi-Fi model release set for July in the US and also Europe. The LTE models will follow soon afterwards. The starting price for the Galaxy Tab S 8.4 is $399 while the Galaxy Tab S 10.5 price is from $499 and they come in Titanium Bronze or Dazzling White color options.

You might like to view the YouTube video below this story that is Samsung’s official promo introduction to these devices. Are you impressed with the confirmed specs of these tablets and what are your thoughts on the pricing? Have you already decided to purchase the Samsung Galaxy Tab S 8.4 or Galaxy Tab S 10.5?