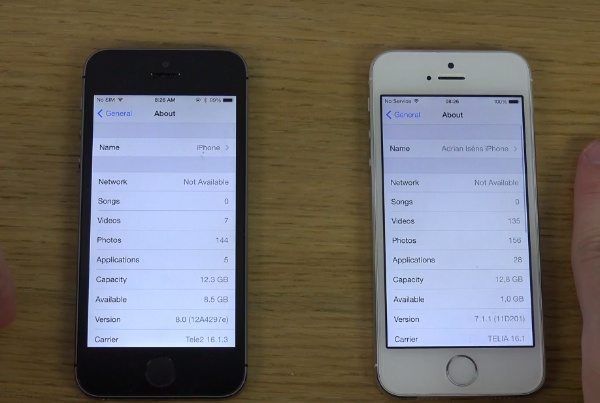 There are many iOS device users already looking forward to the public release of iOS 8. This is currently in the beta stage in the hands of developers, and in the last week Apple released the beta 2 version. Today we have a video to share that shows the iPhone 5S iOS 8 beta 2 vs. iPhone 5S iOS 7.1.1 in a review look.

Below this story we’ve embedded a YouTube video that begins by showing the phones alongside each other running these iOS versions, with the handset on the left on iOS 8 beta 2 and the device on the right with iOS 7.1.1. The video then goes on to show some of the differences between them.

The Ookla Speedtest is then conducted, with some rather surprising results, before the boot-up times of both iOS versions are shown and also some apps being opened to compare speeds. We don’t want to spoil your enjoyment of the video as you might want to find out for yourselves, but it’s worth remembering that the iOS 8 version that is being used is still in beta and is not the finished article.

Once you’ve checked out the video underneath this article we’d be interested to hear your views. Are you impressed or not by what you’ve seen for iOS 8 so far? Send us your comments to let us know.