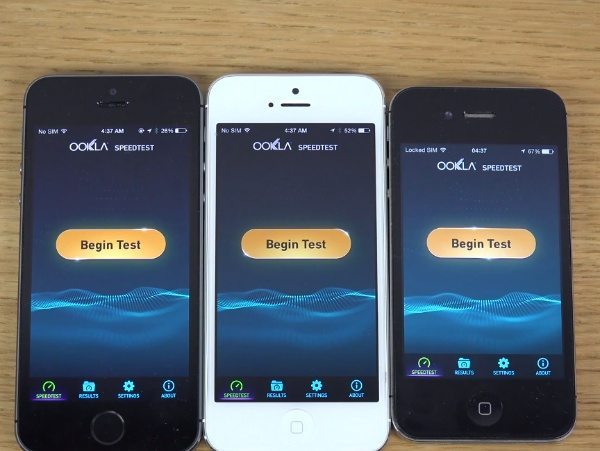 Apple’s iOS 8 was recently unveiled at WWDC 2014 and will be released to the public in fall. Currently it’s in the beta stages with developers and we’ve previously shown a hands-on look at iOS 8 beta 1. Now Apple has released the latest beta and today we have a video of the iPhone 5S vs. 5 vs. 4S on iOS 8 beta 2 that shows an Internet speed test.

Below this story today we’ve embedded a YouTube video comparing these three iPhones alongside each other, which are first shown to all be running the latest beta of iOS 8. The Ookla speed test is then run on all three devices using the best possible Wi-Fi connection at the time. First you’ll see the test being conducted on the iPhone 5S and then the download and upload speeds shown.

The same test is then performed on the iPhone 5, which actually attains higher scores, surprising considering it’s the older of the two devices. You’ll then see the iPhone 4S running the test and unsurprisingly this time the download speeds are much lower than with either the iPhone 5 or 5S.

The test is then performed once more on all three devices for consistency reasons and once again the iPhone 5 trounces the iPhone 5S. Finally the test is simultaneously run on the three iPhones. Let us know what you think of these Internet speed results with the iPhone 5S, 5 and 4S. Are you eagerly waiting for the iOS 8 public release?