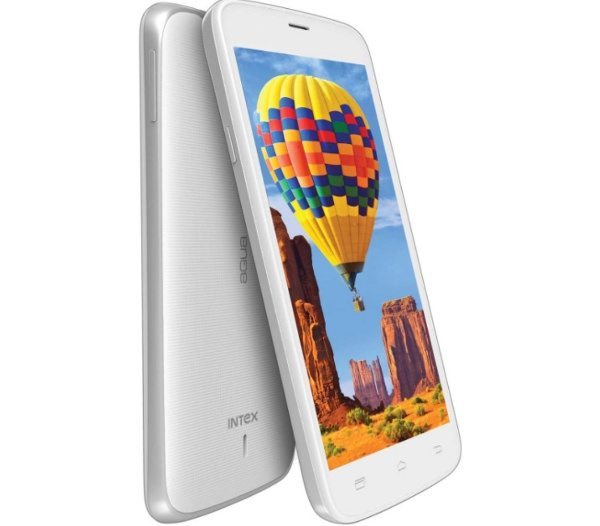 Intex continues to churn out new smartphones for the Indian market and two new handsets have just been launched. They are the Intex Aqua i14 and the Intex Aqua N15 and both will release running the Android 4.4 KitKat operating system. We have details of specs and prices ahead.

Intex Aqua i14 specs include a 1.3GHz quad-core processor, a 5-inch IPS display with resolution of 854 x 480, 1GB of RAM, and 4GB of internal storage, expandable via microSD to 32GB. It has an 8-megapixel rear camera with LED flash, a 2-megapixel front-facing camera, and a 1850 mAh battery. Connectivity options include 3G, Wi-Fi, and Bluetooth and the phone has FM Radio and a 3.5mm audio jack. It comes in black or white color options and is a dual SIM phone.

Many of the specs of the Intex Aqua N15 are similar. It’s also powered by a 1.3GHz quad-core processor but this one has a 4-inch IPS display with resolution of 854 x 480. It has 1GB of RAM and 4GB of internal storage (again expandable to 32GB), and it also packs an 8-megapixel rear camera with LED flash as well as a 2-megapixel front-facing unit. It has the same connectivity options as the Aqua i14 as well as FM Radio and a 3.5mm audio jack. Color choices for the N15 are black, blue or white.

The price of the Intex Aqua i4 (pictured below) is Rs. 7,090 while the Aqua N15 price is Rs. 6,090. Both phones will be available at various outlets across India including e-commerce portals, Intex retail stores, and hypermarkets. Intex also recently introduced the Intex Aqua i5 HD and the Intex Aqua i5 Mini that you can read more about at the above links. Do either of these new Intex smartphones sound as though they could be your next smartphone purchase?