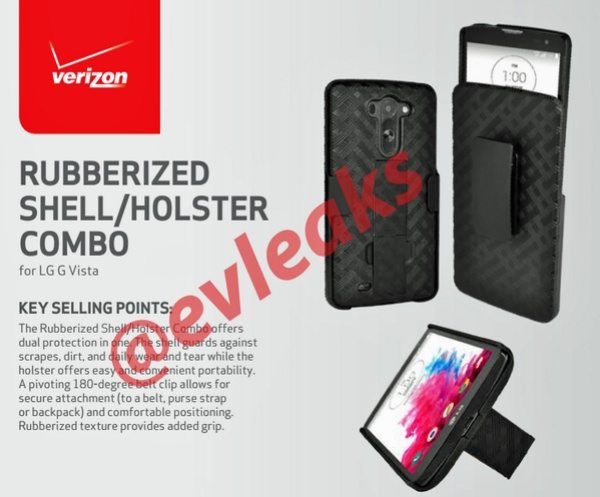 Ahead of new device launches we are always likely to see plenty of leaks, and some are more straightforward than others. If you’ve been hoping for an LG G Pro 2 Lite then you might be interested in this latest leak. A phone looking much like the LG G3 that could be the LG G Pro 2 Lite has been touted as the LG G Vista for Verizon

The original G Pro Lite released towards the end of last year and the in April this year it was followed by the high-specced LG G Pro 2. This of course raised the question of whether there would be an LG G Pro 2 Lite and it now seems as though that could be the case. A Verizon ad has been leaked by prolific and reliable leaker @evleaks, and it’s for a shell/holster case for a device called the LG G Vista.

The same source as this latest leak also tipped the LG G Vista for Verizon with model number LG-VS880 several days ago, and previously this model has been rumored to be for the G Pro 2 Lite. Putting two and two together it looks likely that the G Vista could be the G Pro 2 Lite for Big Red.

It seems unlikely that the G Vista will be launched before the arrival of the LG G3 on Verizon, which is expected to be up for pre-order on the carrier on July 10th and available a week later on July 17th. We cannot confirm that the LG G Vista is definitely the G Pro 2 Lite so we’ll be keeping our ears open for more on this.